Mum-of-two Nicole Bottomley, 58, has the best job in the world. She’s part of a specialist team at Guide Dogs UK who help deliver 1,400 dogs every year. Yes, she’s a guide dog midwife and we want to quit our jobs immediately and sign up. Nicole, who is from Morton Morrel in Warwickshire, has been working for the charity since she was 18. She became a ‘brood bitch supervisor’ three years ago, when she was at the Guide Dogs’ National Breeding Centre (NBC) in Leamington Spa. ‘I grew up in the town, so I used to see the dogs out in training in and around the area,’ Nicole said. ‘Even when I was at school, I knew I wanted to work with them. There weren’t any vacancies at that point though, so I worked for a short while at a veterinary practice, before progressing to Guide Dogs UK, where I have been ever since. 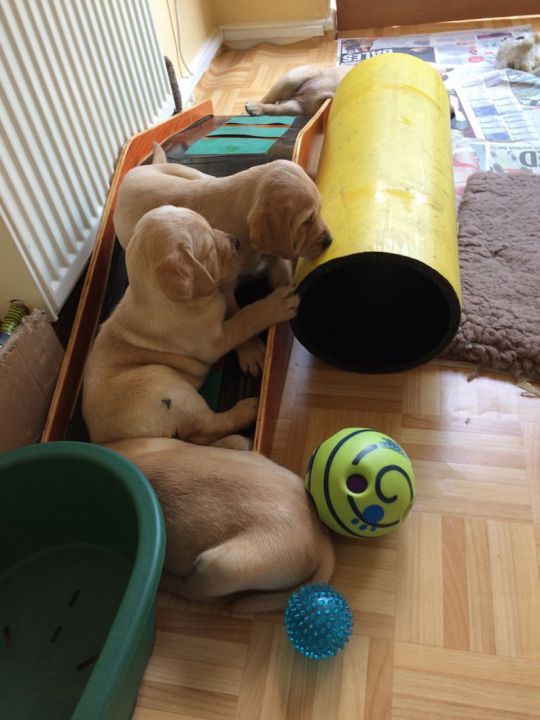 Nicole said: ‘The dogs are very rewarding and I love supporting our volunteer families. It’s amazing bringing these little puppies into the world knowing they are, hopefully, going to go on and become life changers.’ Starting out as a kennel assistant for the charity, Nicole, who has a Grand Basset Griffon Vendéen dog called Gavin, worked her way up to a managerial role, before moving over to the breeding centre as their new dog care manager. Leaving for a while to have her children Jack and Grace, who are now 24 and 20 years old respectively, she returned part-time. But soon after, she went full-time again and joined her current team. They visit dogs at volunteers’ homes, where they are being cared for and also help deliver puppies. Nicole lives with her husband Matthew Bottomley, who is head of breeding operations at Guide Dogs UK. She said: ‘We are there every step of the way, from the time the bitch is mated. ‘We go back after four weeks and conduct an ultrasound scan to confirm that she is pregnant and get an estimate of the size of her litter.

Nicole said: ‘Once she has her puppies, we do litter visits during the weeks that the pups are out in the nest, before bringing them back to the breeding centre at six weeks, when we vaccinate and microchip them, then settling them into kennels. ‘They are here for a week before they move on to their puppy walking homes, which can be anywhere around the country.’ The dogs are given basic training with their puppy walker, who teaches them how to walk ahead on the lead and understand commands such as sit, stay, down and come. They are also taken to cafes and shops to help acclimate them to social situations.