Why do dogs roll in fox poo?

One of the reasons cat people like cats and dog people like dogs is definitely mess. Cats are pretty much self cleaning and stay out of most things. Dogs on the other hand will roll in mud, cut grass, and unfortunately fox poo if it’s there. It does seem crazy that dogs would voluntarily cover themselves in another animal faeces, but apparently there is a reason for it.

The main reason is actually an evolutionary one. Although your pooch might not seem like a feral beast, it’s hard-wired into its brain to act like it would have back when dogs lived in the wild. In those times, dogs would cover themselves in strong-smelling substances so they could sneak up on their prey easier. They’d also do the same to their young to conceal them from any predators that may have been lurking. 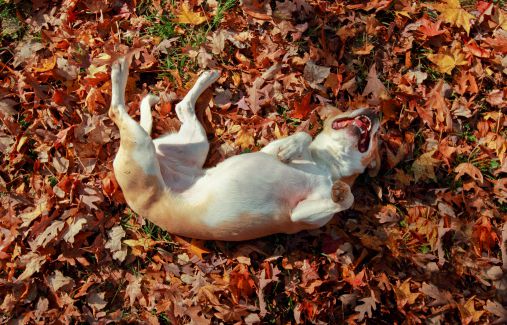 If you bathe your dog using a strongly scented shampoo, you might find that they actually try to go outside and roll in something to get rid of the clean smell. Make sure to always use a specific dog shampoo, and if your dog’s really prone to rolling in fox poo, keep them on the lead in areas where it is. If fido does happen to go for a roll in smelly stuff, some people use ketchup to get rid of the stench. Far easier (and not requiring a second bath to remove the tomato smell) is specific fox poo shampoo for dogs, which should neutralise the odour.