Why do dogs eat poops?

Dogs are scavengers. As many dog owners know to their cost, dogs often have a penchant for things that we find less than palatable. If it’s not counter or table surfing, it might be raiding the kitchen rubbish bin or snacking on rich pickings from the park, street or elsewhere.

Occasionally, those rich pickings include poo, much to the disgust of many owners. That poo can be from a range of species (birds, horses, rabbits, cattle, sheep, deer, and in my own dogs’ case, cat poo is a particular favourite). But sometimes, dogs have a desire to consume either their own or other dogs’ faeces. This behaviour is called coprophagy, literally translated as “faeces eating” and, unsurprisingly, many dog owners don’t like it.

Ironically, dogs are often fastidious at keeping their sleeping areas clean by removing their faeces. Dogs will also actively avoid areas contaminated with poo from other dogs. This is probably an innate behaviour that has evolved to prevent the spread of disease. So given that eating poo does carry disease risk, why do dogs do it? A recent study has shed further light on the subject and could help us manage the behaviour.

First, it seems that not all dogs eat each other’s poo. The study found that only 16% of more than 1,000 dog owners surveyed saw their dogs consume canine faeces at least six times or more (the study’s definition of coprophagy). And 77% recorded never seeing their pets eat other dogs’ poo.

The research showed that several key factors appear to have no effect on whether your dog is a poo-eater. These included age, gender, whether the dog has been spayed or neutered, whether it was housetrained, whether it had been weaned or removed from its mother early, and what the rest of its diet was like. Evidence also suggests that the plethora of products designed to prevent or treat coprophagy, or punishing your dog for eating poo, have no effect on reducing the behaviour.Instead, the recent study suggests the best way to predict whether a dog eats faeces is how much access to poo they have. This is particularly the case if the faeces are fresh, with over 80% of coprophagic dogs only consuming poo less than two days old. It seems that keeping your dog away from fresh poo is the most effective strategy for stopping them eating it. This is yet another reason to promote regular poo picking and responsible dog ownership, both at home and out walking 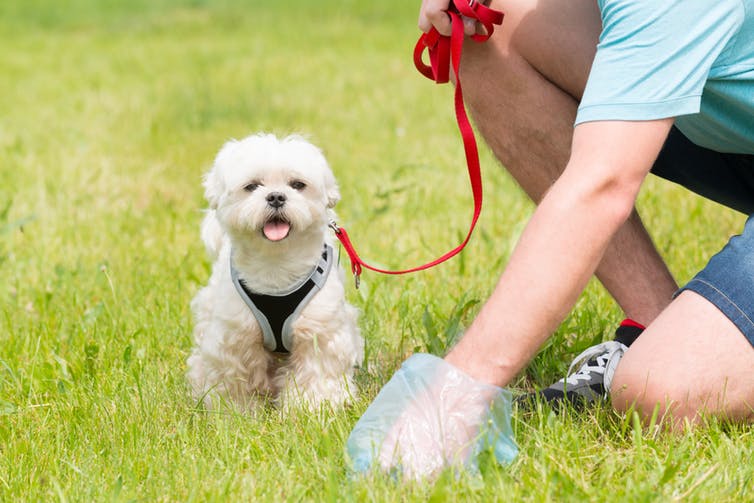 Yet none of this explains why certain dogs will eat poo if they can. It might simply be that some dogs like it and have learned, either by accident or with intent, to consume faeces. Perhaps dogs do it if their owners or other dogs they come into contact with show a particular interest in faeces. After all, we know that dogs often synchronise their behaviour with their owners (though it’s unlikely that most affected owners are coprophagic).

But the study authors suggest that coprophagy is something much more basic. It’s possible that poo eating is an evolutionary remnant from dogs’ ancestors, where faeces could be a source of disease, especially from parasites. Removing faeces early by eating it might represent a way of cleaning it up to prevent infectious parasites developing in the days after it’s deposited. And dogs today may indulge in exactly the same behaviour.

So what should you do if the prospect of your pet eating poo fills you with horror? Aside from owning a single, non-greedy poodle, the best thing to do is simply to prevent your dog having access to poo, especially the fresh stuff. Clean up after your dog, encourage others to do the same, and try training your dog to resist the temptation to eat poo by rewarding them with an alternative tasty snack.