Unlucky dog freed by firefighters after getting head stuck in tyre

Firefighters in Texas have revealed one of their nicer calls of the week – tending to a dog with her head stuck in a car tyre. The unlucky boxer was driven to the fire station in Grand Prairie on March 14 after her owner realised what she had done. The crew then had to use a small saw to cut the rim of the wheel to free the unlucky boxer.

It took approximately an hour to cut the rim apart enough for the dog to pull herself out.

According to the rescuers, it was especially hard to free the animal since she had so much extra skin around her neck. But it seemed the dog was very grateful to have been freed, rewarding the team with ‘doggy kisses’. The Grand Prairie Fire Department tweeted afterwards: ‘Our buddy was pleased to see Station 6 B-shift come to his rescue! 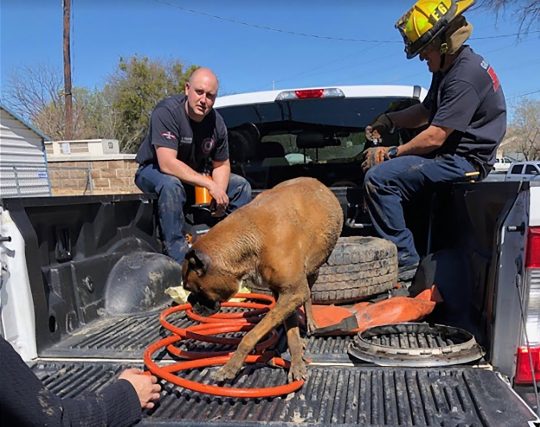 ‘The rim had to be cut apart using a small saw to make room for the dog’s head to pull out. He thanked them with plenty of doggy kisses!’ One resident of the area then responded by adding: ‘Boxers, such lovable messes!’