×
Home / News / ‘This is a calamity’: the surgeons keeping pugs and bulldogs alive

‘This is a calamity’: the surgeons keeping pugs and bulldogs alive

The most striking thing about Sidney’s mouth, which has been hoisted wide open with rope, is his teeth. They are in unusually good condition for a four-year-old bulldog. His incisors, while gappier than a row of gravestones, are a brilliant white and his tusk-like canines gleam like polished ivory under the surgical lights. Further down the dog’s jaw, however, the picture is less healthy. Sidney can’t breathe properly. He has been put under at Battersea Dogs & Cats Home for an operation that may help.

As Sidney waited in a holding pen at the animal home’s hospital, he and Frankie, a similarly affected French bulldog two doors down, could be heard snorting and gasping, even at rest. They suffer from brachycephalic obstructive airway syndrome (BOAS), which is estimated to affect half of all brachycephalic (flat-faced) dogs, most notably bulldogs, French bulldogs and pugs. Shaun Opperman, Battersea’s veteran head vet, has scrubbed up for an operation he now performs with alarming regularity.

What follows is gory, but Opperman is keen to reveal – in bloody detail – what happens when pet trends fuelled by social media combine with decades of unnatural selection to create a cycle of cruelty, unregulated trade, abandonment and early death. As breathless breeds become more popular and the animals age, vets warn the cycle is about to get much worse. “This is a calamity waiting to happen,” says Dan O’Neill, a BOAS expert and a veterinary epidemiologist at the Royal Veterinary College in Hertfordshire. 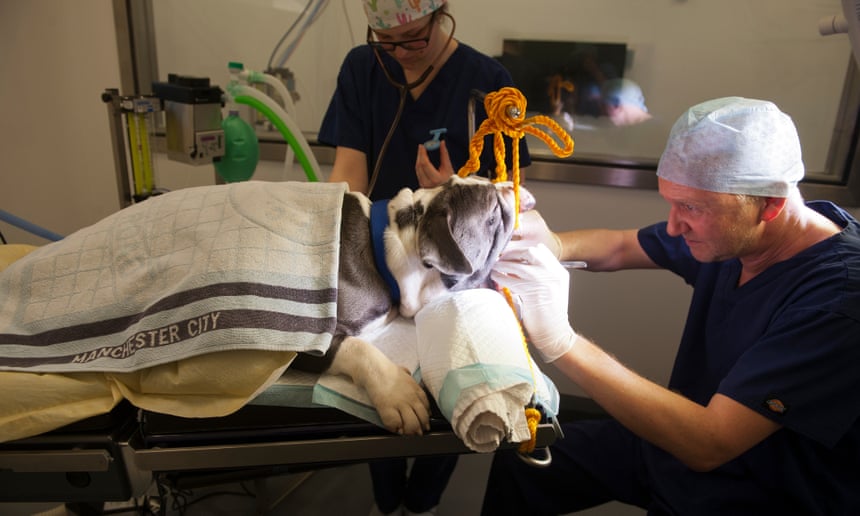