A swimming pool in Scotland held their first ever doggy swim day so pets could splash around alongside their owners. The open-air Gourock Outdoor Pool, in Inverclyde, Scotland let canines take a dip at the weekend at the last swim session of the season. Organisers were inspired by similar events which have taken place in England. Stephen McNally, 43, went for a dip with his Spanish water dog, Ibby, after travelling Bishopbriggs, East Dunbartonshire, for the special event. The pooch, aged four-and-a-half, loves splashing around in water and Stephen, who works as a resource manager, was happy to join her. Stephen said: ‘Ibby loves the water. ‘If we go to a beach, it is hard to get her out of there. ‘But I was shocked to see that she enjoys surfing as well. ‘There were a lot of floats there and she enjoyed being on them. 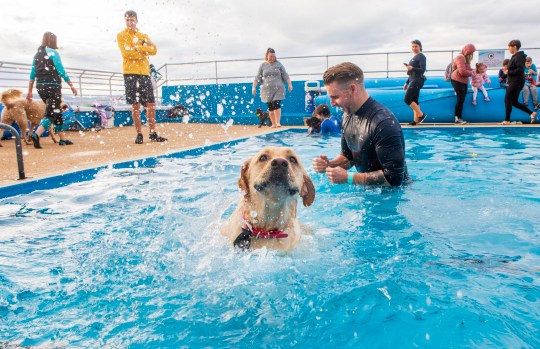 ‘Everyone had a good time, I even heard some people came from as far as Ireland to be part of it.’ Organiser Natalie Skee brought her own dog, Esmerlda, a pug-beagle cross, for a swim.