Stolen Willow in the Daily Express.

REGULAR Facebook users are accustomed to the almost daily plea from a distraught pet owner for help in finding their stolen dog. It is estimated that 60 a week are stolen in England and Wales – but this number could be much higher as many cases go unreported. So-called designer dogs are the pooch of choice for criminal gangs, who scour the country on the lookout for these high-value pets. Once taken from their owners, they are sold on the black market or to unsuspecting customers, in some cases, for thousands of pounds. But the emotional distress it causes owners, who are parted from their much-loved family pets, is unbearable.

One who knows this only too well is Freya Woodhall whose chocolate-coated sprocker spaniel disappeared from her back garden last September.

“One minute she was there and the next she wasn’t. She completely vanished,” says Mrs Woodhall, 43, from Homer in Shropshire.

The Woodhall family have the gut-wrenching feeling that their beloved dog, Willow, who is still missing, did not run off.

They believe she was stolen. “We all think it’s really out of Willow’s character,” says Mrs Woodhall.

“She just follows you around everywhere. It’s heartbreaking. All these questions race through your mind – how, why, what?”

Lenient jail sentences for those convicted is proving not enough of a deterrent and, according to DogLost, a not-for-profit organisation tasked with reuniting the pets and their owners, this is a lucrative business.

While the maximum prison sentence for pet theft can carry up to seven years, custodial sentences are rare for thieves, who are more likely to receive a slap on the wrist with a fine or community order. 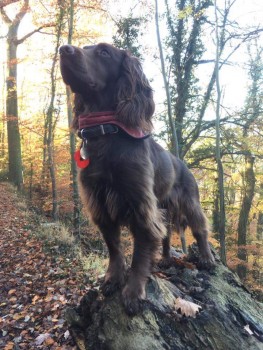 After Willow’s disappearance, the Woodhalls knocked on doors and spoke to neighbours, as made appeals on local radio and on social media. But their search proved fruitless and eventually they reported Willow stolen to Shropshire Constabulary. Before Willow was taken, pet theft was not something they thought would ever happen to them.

“You never think it’s going to happen to you, especially where we live because it’s so small and quiet,” says Mrs Woodhall.

“But it’s like having a child. You wouldn’t leave a child outside in the back garden on its own and now I’d say the same about any dog. You think you’re in a safe environment but we’ve found out the hard way.”

She adds: “Willow was my shadow, she went everywhere with me and I am lost without her.

“We’ve kept her bed is in the same place as it was with her blanket on top. Sometimes I turn to fuss her and she’s not there. She’s never far from my thoughts. I feel totally hopeless.”

It’s not just Freya and husband Ross who miss Willow. Their four children have also had to deal with the loss of their dog.

“Last Christmas, their one wish was for Willow to be found and returned to them.