The emaciated body of the grey and white brindle Staffordshire bull terrier-type dog was fished from the water last Thursday.

The grim discovery was made at around midday by a man fishing in the canal near to a cinema in Bentley Bridge, near Wolverhampton.

The starved pooch, aged around three, had been wrapped in bedsheets before being callously dumped in the water.

The fisherman contacted the RSPCA and the animal charity has now launched an appeal to find the owner responsible. 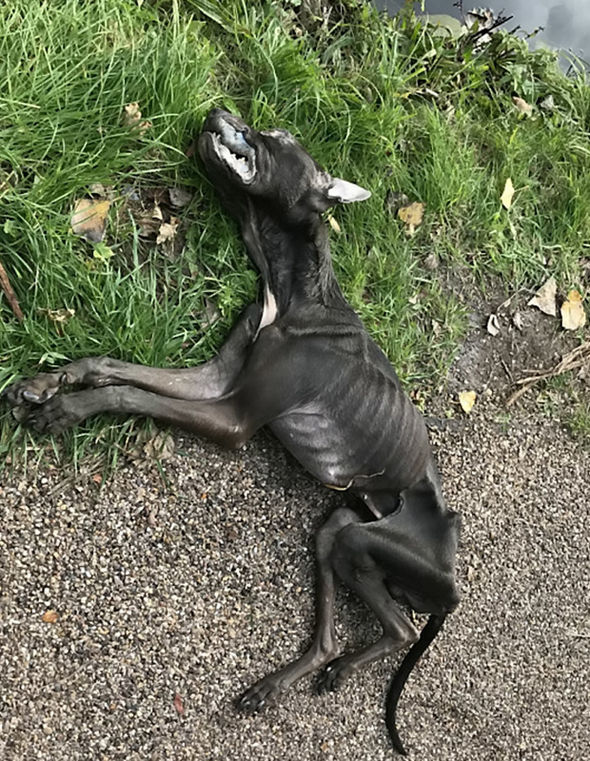 RSPCA inspector Vicki Taylor was called to the scene and retrieved the dog which she said resembled a skeleton.

She said: “The poor dog was in such a poor bodily state it seems to me that someone has starved him and then decided to dump the body in the canal.

“It was a sickening sight.

“When I got the dog out I could tell he had not been in the water for too long so I am wondering if any witnesses saw him being dumped a few days before being discovered.

As he was quite a distinctive-looking Staffordshire bull terrier with his colouring and long legs I am also hoping someone may recognise him from the photographs and help identify the owner.

“It is horrendous that this poor dog probably suffered for weeks from starvation and I am very keen to find the person responsible. ”

The dog was microchipped and its owner traced but she had sold the dog to a man 19 months ago and the details had not been updated.

The first owner said the dog had been called Blue at the time but it is not known whether the new owner changed his name.

Anyone with information about the incident is asked to call the RSPCA appeals line on 0300 123 8018.