Puppies abandoned in plastic box given names after Marvel superheroes

Ten puppies have been given names after Marvel characters after they were found abandoned in a plastic box in Newport. The white, black and tan lurcher-type dogs were discovered by their very own superhero member of the public who took them to an animal rescue centre. They have not been injured, but RSPCA said some of the dogs look underweight. After a rough start to life, they’re now being cared for by staff who have honoured them with new hero identities. The girls have been called Mary Jayne after Spider-Man’s main love interest, Jessica Jones after the New Avengers member, Hope after the superheroine who first appeared in X-Men, Wanda after the Scarlet Witch and Gwen after Spider-Woman.

And the boys have been named Groot after the tree-like superhero, Quicksilver after the character with superhuman speed, Franklin after the Fantastic Four hero, Loki after Thor’s adopted brother and Logan after Wolverine. 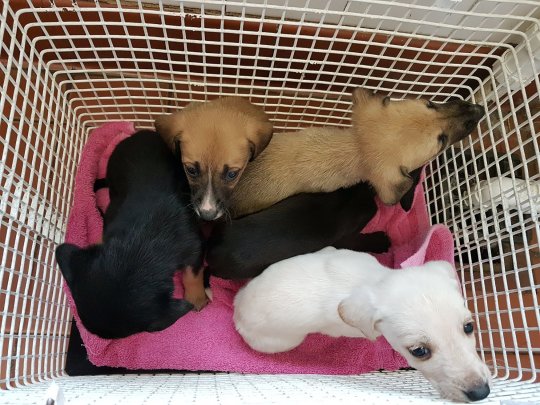 The dogs were left on their own in the small box near Iron Age hill fort just off Bassaleg Road. RSPCA inspector Izzi Hignell is appealing for information and said: ‘The puppies were just abandoned in a box – left on their own. ‘They must have been so frightened. The box was small for the number of puppies so they were on top of each other.

‘Luckily a member the public found them and took them to our centre for safety. ‘They are not unwell but a few look underweight and will be monitored. They are currently at a veterinary practice and will be soon taken to RSPCA Newport Animal Centre. ‘It is just so sad that someone didn’t know where to get help and just decided to dump these poor puppies.’