A new law named after a police dog which recently appeared on Britain’s Got Talent has come into effect.

German shepherd Finn was stabbed and seriously hurt as he protected PC Dave Wardell from an attacker in 2016.

Nicknamed “Finn’s Law”, the new legislation makes it harder for those who harm service animals to claim they were acting in self-defence.

PC Wardell, who has led calls for the change in the law, said the pair’s journey had been “incredible”.

The father-of-three and Finn reached the final of ITV’s primetime variety show with a magic act that moved the judges to tears.

“This law is the only reason I put myself on stage in front of nine million people,” said PC Wardell, who is still a serving officer.

He began campaigning for the new Animal Welfare (Service Animals) Act after Finn – now retired – saved his life when a knife-wielding robbery suspect attacked them in Stevenage in 2016.Finn was stabbed in the chest and head and was not expected to survive. PC Wardell was stabbed in the hand. 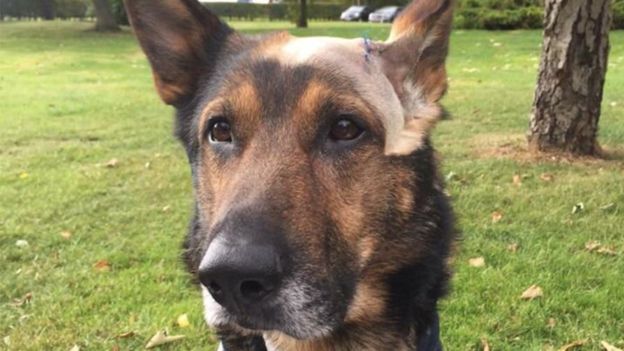 Under the previous law, the attack on Finn could only be treated as criminal damage.

PC Wardell said this has made it difficult for the judge to “put a value on property” when deciding on a sentence.

“Service animals until now have fallen through legal loopholes,” he said.

The new law was an attempt to “take the model of Australia and Canada” and “right that wrong”, he said.

PC Wardell said he would now push for increased sentences on all animal welfare cases, and a consultation is currently under way to amend the Animal Welfare Act in Scotland. 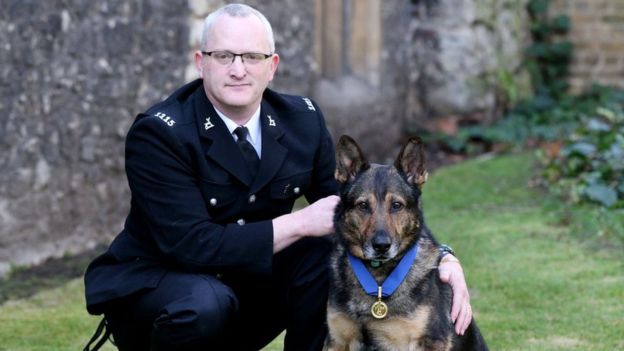 “Finn is an incredible dog and an amazing character,” he said.

“He could be in a primary school for book readings one minute – and breaking up a pub fight the next.

“I’m immensely proud of him.”