A campaigner who opposes part of a ban on electric shock collars for dogs and cats in Wales has repeated calls to allow limited use to stop animals from straying.

Monima O’Connor has been campaigning for containment sensing collars to be removed from the ban introduced by the Welsh Government eight years ago.

Scotland is introducing a ban on the collars and England may follow suit.

The Welsh Government said animals should be protected from pain and fear.

Ms O’Connor, from Cardigan, Ceredigion, said her campaign only related to containment sensing devices, which do deliver a shock but are designed to keep an animal within a particular location.

She told Radio Wales’ Jason Mohammed programme: “It’s specifically for containment sensing. There is a buried wire that goes around the garden and prevents your beloved pets from being run over or going into other properties.

“The assembly members I have met since said they never knew about containment sensing. It was just about the remote devices for training dogs that was voted on.”

Ms O’Connor denied the collars acted in the same way as training collar, which can deliver a shock lasting up to 11 seconds.

“It’s a static pulse rather like a muscle stimulant and it lasts for a nanosecond.”

She also said in the draft legislation for the Welsh Government ban containment collars were exempted but were then added in “without any justification at the last minute”. 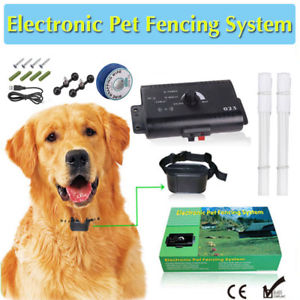 However Dr Sam Gaines, head of the RSPCA’s companion animals department, said the devices were cruel.

She told the programme: “The RSPCA has strongly opposed the use of electric shock collars for both training and containing cats and dogs for many, many years.

“Whether you are using the electric shock collar to try and train your dog or using a system to contain a cat or a dog they are both designed to use pain and fear.”

The Welsh Government said: “Animal welfare is a priority for us and animals should be protected from pain, injury, fear and distress.

“This is why in 2010 we introduced regulations to prevent the use of electronic collars on dogs and cats.”