Dozens of military dogs were put down last year after they were found to be unfit for service.

A total of 41 were euthanised when they could no longer perform the demanding roles they were trained for.

The dogs were found to have illnesses and chronic conditions while others were healthy and judged to be unsuitable for being rehomed with civilians.

Despite this, 121 dogs were rehomed in 2017 under a scheme known as Military Working Dogs, according to Freedom of Information figures.

There are currently hundreds of Forces dogs who are often exposed to traumatic events while working in war zones and doing dangerous work such as clearing explosives.

Dog behaviourist Debbie Connolly, founder of SafePets UK, said she believed some animals which were put down could have been spared. 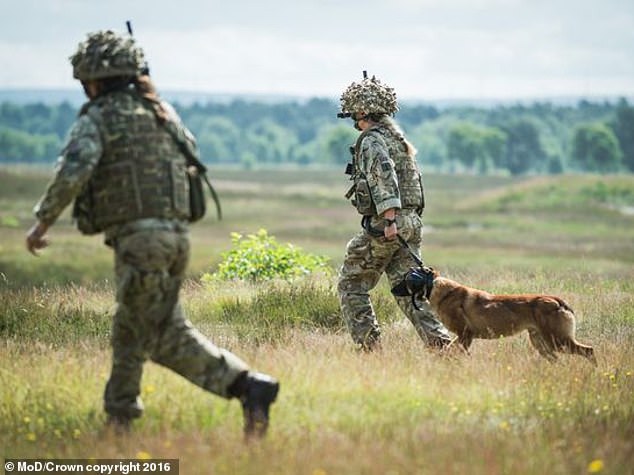 She told the Mirror: ‘Occasionally I get them and put them through rehab.

‘The problem is that the MoD don’t seem to be keen on working with anyone else. It’s just them deciding.

‘I’m not pretending this is a fluffy bunny business where every dog can be rehabilitated. But they should be given the chance.’

The MoD have defended this and said every effort has been made to rehome the animals but at times, rehoming does pose a risk.