A dog that was stabbed in the head with a screwdriver and set on fire has miraculously found a loving new home for Christmas. Bruce the bull-lurcher was found in August wondering dazed, battered and covered in blood. He was helped on his long road to recovery by veterinary nurse Marie Coleman who decided to bring Bruce home with her.

She says he’s happy and healthy and she is looking forward to spending their first Christmas together at her home in Carlisle. ‘Christmas is going to be really special with him in our lives,’ Marie said. ‘He will even have his own presents under the tree, we’re going on a long walk on Christmas morning and then he’ll have his own dinner of turkey and pigs in blankets. ‘When I first saw Bruce was in a terrible state when I first saw him, and I spent the weekend nursing him following his operation. ‘I fell in love with him because he has the sweetest temperament and never grumbled when he was being treated even though he was in terrible pain. 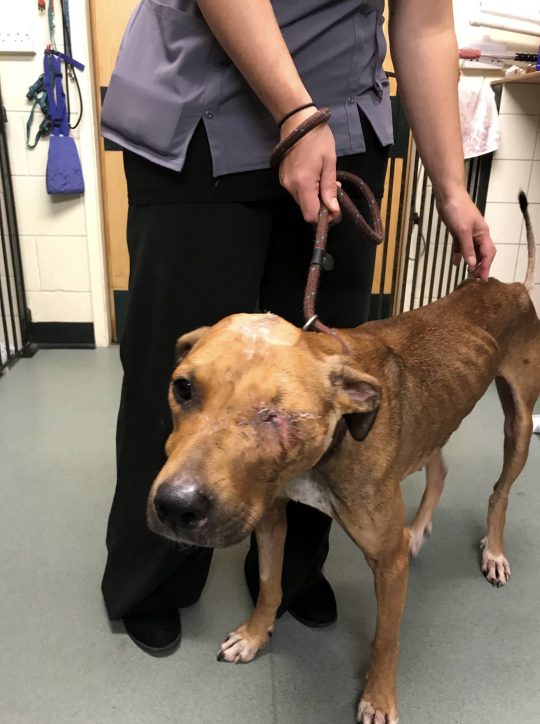 Bruce is now a lovely family pet, he sleeps on the sofa cuddled up with my little boy, George. ‘He loves long walks and running about in the countryside and playing with dogs we meet. He’s happy and healthy and hopefully, he has a long life ahead of him.’ Bruce was given life-saving surgery to remove an eye at Ashlea Vets in Carlisle in August. He was so underweight you could see his ribcage and he had a deep hole in the top of his skull where someone had stabbed him with a screwdriver. Several other puncture wounds were found in the side of his face as well as burns around his tail and rear end. 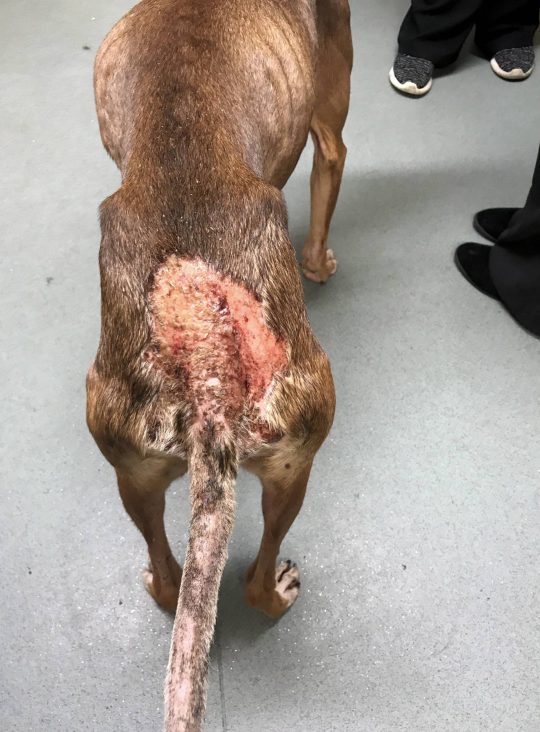 Clinical director at Ashlea Vets Kirsty Barker described his plight as the worst cruelty case she has seen in 30 years as a vet. ‘We’re delighted with his progress as he is a lovely dog and we’re thrilled he has found a lovely home,’ Kirsty said. ‘I’d never seen a cruelty case like his and I never want to again. ‘I felt physically sick when he first came in, he was so sad, depressed and suffering from terrible injuries.’ Bruce returned this week to the vets for a check-up and staff presented him with a Christmas present.