×
Home / News / Groom, 69, chooses dog to be his best man after the beloved pet helped him find love

Groom, 69, chooses dog to be his best man after the beloved pet helped him find love

When 69-year-old Christopher McCarron lost his son, he decided to adopt a dog to cope with grief. Visiting the Dog’s Trust centre in West Calder, Scotland, Christopher was immediately won over by a rottweiler called Jack. While taking the doggo for a walk to get to know him, he bumped into Margaret, 56, who was at the rescue centre looking for a pet too. The two hit it off and after falling in love, they decided to get married.

With Jack being a major player in his love story, Christoper knew his furry friend had to be there. So he decided to put a wee tuxedo on him and make the doggie his best man. When it came to Christoper and Margaret saying I do, little Jack got involved and sneezed to give his blessings. 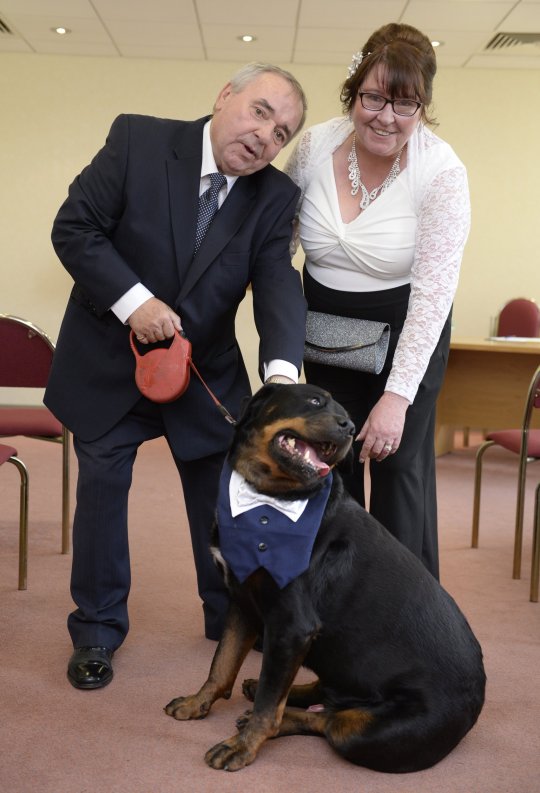 ‘We had a lovely sentimental day, and Jack played a big part,’ gushed Christopher. ‘He loved it, he really did. I wouldn’t have considered getting a rescue dog because of his age – he’s around six. ‘But when he went up to me, we just clicked. Little did I know that I’d meet my future wife at the rescue centre too. ‘I don’t believe that I rescued Jack – I think he rescued me. ‘When we decided to get married, Jack had to be there. This is our family now, me, Margaret and Jack.’