Meet Dream the corgi – she is a dog that really lives up to her name. When her owner Nicky Logie’s cat Roo died six days after giving birth to five little kittens, Dream really stepped up. The orphaned kittens were still tiny and with no one to look after them, they were pretty vulnerable. But Dream took them under her paw – licking and comforting them, helping them to thrive.

Nicky explained: ‘I immediately went to vet to get milk replacer and started feeding the five kittens but it was a struggle and they weren’t going to the toilet afterwards. ‘Dream was intrigued and watched the whole morning. Then she came over and pushed my arm and put herself between the kitten and me. She started licking the kitten and immediately he urinated. 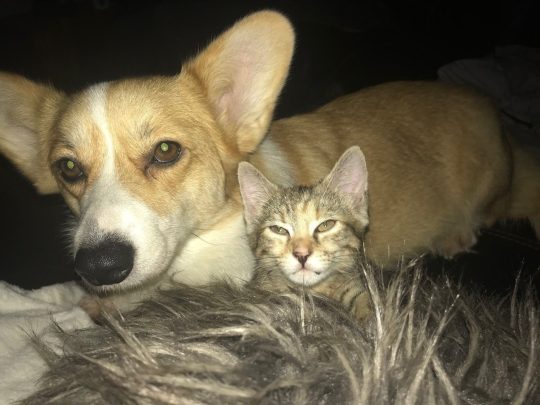 ‘I fed them every two hours and Dream was always there to lick them. They started to recognise her smell and got excited when she was near. She would also jump into their bed and lie with them, comforting them if they cried. ‘She helped with weaning them and cleaned them just like their mum would have.’ When the kittens were big enough to go to new homes, the Logies decided that they couldn’t let them all go and they should keep one, who they named Spruce. Nicky added: ‘After all her hard work, we couldn’t let them all go so Dream got to keep a kitten! Her and Spruce still spend all their time together and sleep with each other.’

And although the kittens are now fully grown, Dream’s mothering instinct didn’t stop there. Nicky also recently had a litter of puppies from one of her other dogs and as soon as the mum allowed Dream near them she was right in cleaning and cuddling the puppies. Dream is now due to compete at Crufts next week from 7-10 March. Nicky, who has been competing at the dog show event for over 20 years, and her daughter Erin hope that the judges will recognise how special she i