A dog owner whose pet was seized by officers who believed he was a banned breed has accused police of a catalogue of abuse while he was in their care. Mitch spent four months in kennels after being taken by officers who suspected he was a pit bull on November 22, 2018. Owner Paulina Lazar, 23, claims his tail had been cut off, was covered in cuts and was missing fur when he was returned. She told Metro.co.uk: ‘Mitch was not the same dog that was taken. He just wasn’t. I started questioning whether that was actually my dog.

Mitch was taken from her brother Pawel, 21, as he was walking him close to where they live in Dagenham. Under the Dangerous Dogs Act, animals can be seized and kennelled by officers if they believe the animal will pose a threat to the general public. She said: ‘It breaks my heart for someone to lock him away and not even care about him.’ Police would not tell them which kennels Mitch was taken to, but Paulina said they were repeatedly told their pet was fine and doing well. After Paulina and her brother plead guilty to possession of a fighting dog, Mitch was allowed to return home – as long as he was castrated and wear a muzzle when out in public. 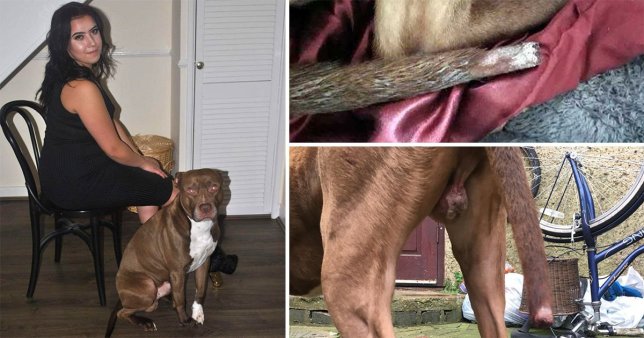 They were also ordered to pay £1,000 to cover the costs of his stay in kennels. Under current legislation, a dog does not have to have fought be considered a fighting dog, it just has to bear ‘characteristics’ of a dog that could be used to fight. The family was ecstatic to have Mitch back, but when they went to pick him up, they couldn’t believe what they saw. ‘He had scratches all over his back and belly, he was so skinny, and although he had only just been castrated he wasn’t wearing a cone to stop him from licking the wound,’ she said. ‘The scratches on his face looked like he had been fighting another dog, he couldn’t have done it himself.’ She added: ‘He’s always been such a nice, happy dog and we’ve never had any issues with the neighbours. ‘We never thought he could be dangerous.’