Dogs of Christmas past 2014

I rember this well! It was amazing to be able to ring owners with the good news Doug would be home for Christmas after 10 months…When the vets scanned Doug with halo scanner it came up with ring Doglost as our lost dogs chip numbers are channeled into Halo scanner….Read the timeline here…Its good reading! 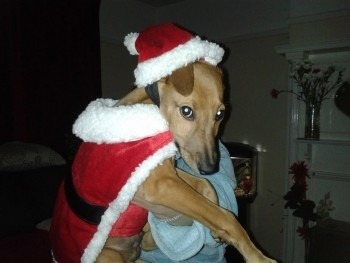 And from our news page at the time…

We all love a Christmas reunited story – and let’s face it – there have been plenty in the last few days, but the one we loved the most was young Doug the Whippet.

Doug was stolen from outside his home in Hertfordshire in February, and an undercover investigator from DogLost soon came across a whippet they hoped was Doug. He was traced from location to location whilst Doug’s anxious owners were helped by DogLost’s local co-ordinator, Hazel.

Last week the little whippet was dumped 20 miles from where he was first stolen and taken to a place of safety, where he was scanned by the Halo scanner and indeed found to be Doug.

Louise, Doug’s owner told us: “We have been given the best Christmas present ever. Hazel has been an absolute diamond and I can’t thank her enough for all the work she has done and made me believe I should never give up hope.”

Said co-ordinator, Hazel: “It was a lengthy trail, but I hoped we would get there in the end. I’d really like to thank everyone who was involved – a great piece of DogLost teamwork.” 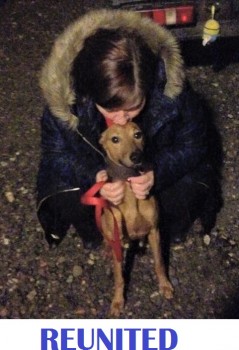