A driver shocked RSPCA inspectors after almost killing his dog by leaving the animal in a baking hot car by declaring: “It’s okay, I am a vet.” Another pet owner confronted about a dog being left to endure potentially deadly temperatures in a sweltering vehicle confessed: “It’s not like my dog’s on its own in the car, my kid is with it”

These appalling excuses for putting pets’ lives at risk of cooking to death in searing hot cars are revealed today as the nation’s dogs suffer in the summer heatwave.

Seven calls every hour have been coming through to the RSPCA’s emergency hotline about pets trapped in vehicles as temperatures reach the high 20s.

Yet far from being contrite, pet-owning motorists are ready to blame their potentially lethal actions on all manner of reasons except their own stupidity.

The RSPCA today revealed some of the feeble excuses its officers hear when the charity explained how it received 167 emergency calls about dogs in hot cars on Monday. 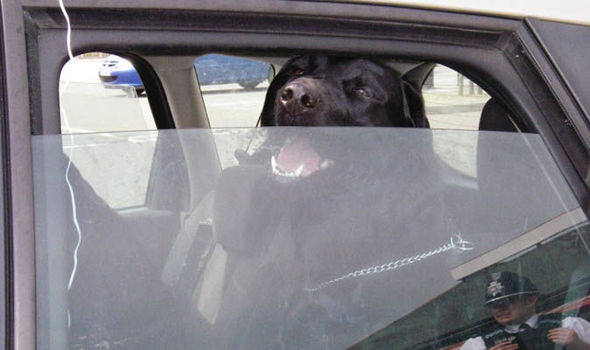 Among the reasons for leaving dogs the RSPCA’s inspectors have had to listen to include:

• “They’re fine, they’re smiling?” The dogs were not smiling but panting excessively.

• “I parked the car in the shade when I got here, I can’t help it if the shade moved.”

• “The dog barks when I leave it alone in the house, it annoys the neighbours.”

“I’m having an open day to sell my house, the dogs would have been in the way.”

• “We didn’t think we’d be long.” The owners had been at a Sunday service at church.

• “I’ve only been in the pub for half an hour, anyway it’s OK, I run a dog rescue centre.”

• “It’s not like my dog’s on its own in the car, my kid is with it.” On this occasion ‘the kid’ was a five month old baby strapped into a car seat.”

• “We feel bad leaving him at home on his own all day.”

The justifications, explanations and apologies show that years of campaigning by animal welfare groups about pets suffering in cars on warm days are failing to get the message to even dog owners who should no better.

Since the current hot spell began earlier this month, the RSPCA says it has received 625 calls about animals and hot environments, the majority cars.

With a high profile dog rescue carried out by police in York Hospital car park on Monday, the RSPCA today reiterated how an animal can suffer if left in a vehicle even on mild days.

“The RSPCA message is clear: ‘Not long is too long’ and we urge anybody with a dog not to take the risk and to leave their pet at home,” says the animal welfare charity.

“Temperatures can rise quickly in cars, caravans and even conservatories – when it’s 22C outside within an hour the temperature can reach 47C inside a vehicle, which can result in death.”