Dog’s ears fell off after owner dyed them bright red

A Pomeranian named Diffy lost both his ears after her owner decided to dye them bright red. Diffy had been taken to a dog grooming saling on Hua Hin, eastern Thailand, earlier this week where his owner asked for the colour to be put on her dog’s ears and tail. The colour was left on Diffy’s soft blond fur for 40 minutes during the foil wrap dye job with reports it left his ears ‘permanently drooping’ instead of standing up as they did before.

The groomer allegedly told the dog’s owner her pet’s ears would perk up ‘after two or three days’ but Diffy’s skin became red and flakey almost immediately. 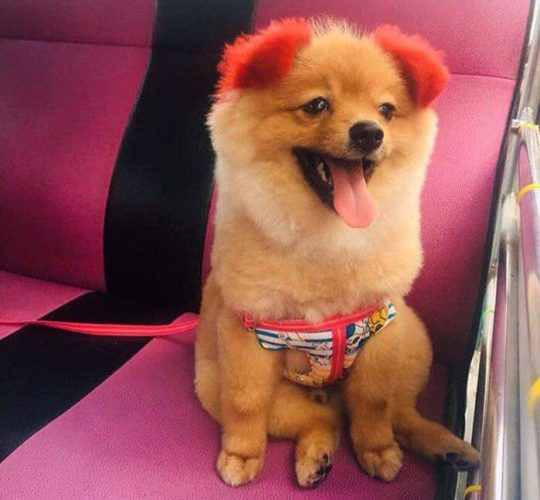 It is believed Diffy suffered an allergic reaction to the strong colourant and was left with burning, itchy ears.

His owner, who has not been named, posted online asking for help but faced an angry backlash from her followers for being ‘irresponsible’. She wrote: ‘Before the dye, my dog’s ears were up. But after I went to the pet store and the dog stylist coloured his ear with aluminium foil for 40 minutes without heat, I took him home and his ears turned out like this. ‘They were folded down. The stylist said that I have to wait for two or three days and his ears will recover. ‘Has anybody experienced this before?’ 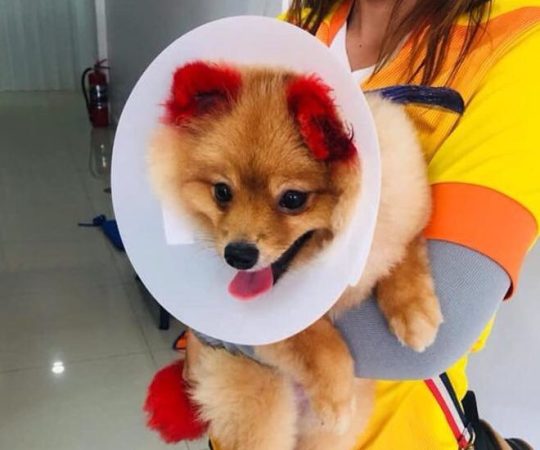 Despite receiving advice from other dog owners who had undergone the same procedure, Diffy’s left ear was so badly affected that yesterday, it fell off. The dog owner said: ‘Diffy’s left ear is now falling off because of the colour dye.

The pet groomer put too much dye on him. My dog’s ear was itchy, burnt, turned black, cracked, and eventually fell off. ‘I don’t blame the grooming store but I blame myself for wanting to have his ears dyed.’ She posted a picture of herself holding Diffy’s detached ear which was later shared by vets in the country. Neeyada Sirisampandh, who runs the dog rescue group Mid Road Lover in Bangkok, said: ‘Let this be a lesson to other dog owners. It is dangerous to dye your puppy’s fur.

‘This dog’s ear looks like it suffered an allergic reaction and was burned. Then it fell off. His ear is gone forever. ‘It’s all the owner’s fault for trying to colour them.’ The RSPCA warns that while pampering may seem like a treat to owners, it can leave pets distressed. ‘Our pets are living creatures and dyeing them sends out a worrying message that they could be viewed as novelty accessories rather than as intelligent, sentient animals,’ a spokesperson told Metro.co.uk. ‘People may think they are treating their pets by dying their fur but some of the paints, dyes, inks and glues used can be toxic and harmful to animals. ‘Even if a dye is marketed as “pet friendly”, we would strongly advise against it. ‘These dyes can be dangerous and the experience of being dyed can be stressful for our pets who do not understand what is happening.’