THE terrified heartbeats of a trapped dog helped firefighters rescue it deep underground. Using specialist proof-of-life detectors, the intrepid rescue team were able to locate the exact spot where Bear the mischievous Chihuahua-Yorkie cross had become jammed in a rabbit warren.

Crews from Scottish Fire and Rescue were mobilised to save the distressed pet when he vanished down a rabbit hole and then become wedged inside the maze of tunnels.

With a proud record of helping animals in a fix, the rescue teams from Linlithgow and Alloa were able to deploy specialist equipment used to trace people in urban rescue emergencies.

The sensitive devices can detect the faintest sounds of breathing and heartbeats and were designed to find people under rubble.

After being stuck for four hours, the distinctive thumping of Bear’s heart alerted the crews to start digging down to exact spot where he was stranded. 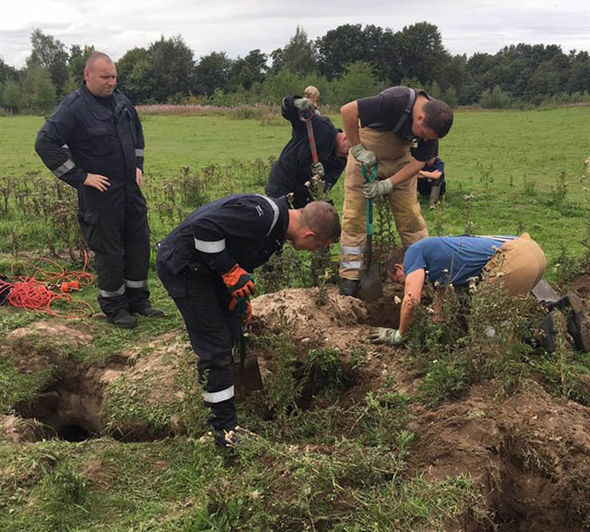 Watch Manager Alan Roy today described the efforts made to reunite the tan-coated pet with his relieved owner.

The firefighter said: “This was certainly one of our most unusual callouts.

“The crew initially tried to find the dog by digging into the field without success – but we were determined not to give up on this brave little animal.

“The life detector listening equipment is used in urban search and rescue situations where we try to locate people in collapsed buildings.

Using a series of sequences we were able to pinpoint the approximate location of Bear who was stuck down one of the rabbit warrens.

“We dug down and were able to retrieve the dog who appeared a bit bewildered but in good health.

“It was crucial we acted as quickly as possible so the animal didn’t injure itself. He was hydrated with water after his ordeal and after some cuddles from the crew and his owner he looked set to go chasing the rabbits again.”

The dog rescue is not the first time Scottish Fire and Rescue firefighters have used their skills to help animals in tricky situations.