Dog trapped in engine during Bangor to Belfast drive

A Jack Russell endured a long drive from Bangor to Belfast under the engine of a car, but escaped with only a few leg burns.

Clyde, whose owners are from Bangor, was found trapped between the engine and the car wheel of a German tourist’s car.

The dog had been missing since the previous night.

His owner Chris Mullen runs the Cairn Bay Guest House, where the tourists were staying.

He is now on antibiotics and was treated for leg burns after the 17-mile road trip.

Holly Edgar, from Belfast, witnessed the dog’s rescue after the family found Clyde lodged under the engine while they were parked at Belfast Castle. 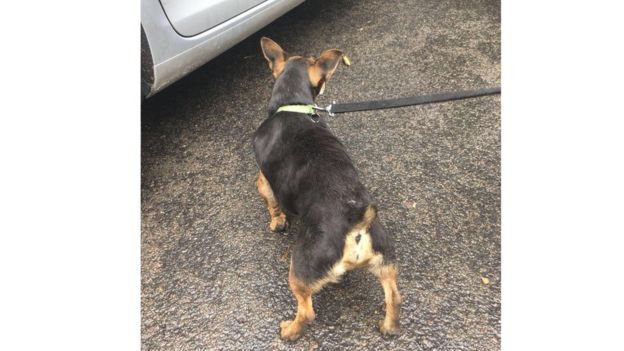 “The bonnet was up and they looked very distressed. We thought their battery had run out,” said Mrs Edgar.

“Then we heard this noise like a whining. When we looked behind the front wheel we saw him.

“He was biting and biting, trying to get himself out.”

Mrs Edgar called for help – from her uncle and her friend’s husband – for a car jack to release Clyde.

But when they arrived they realised that two car jacks were not enough – they would need to remove the panelling.

“At this point there were lots of passers by giving us hilarious suggestions. One woman said that we should ask the zoo to help,” said Mrs Edgar.

The panelling and engine protector was pulled back and Clyde was taken out of the car.

Mrs Edgar said that Clyde was able to walk, but was “quite shaky”.

At first, the German family were unsure where in their journey Clyde could have wedged himself into the car.

The visitors had been staying at the Cairn Bay Guest House in Bangor the night before.

The next day they travelled to the Titanic Belfast, where they parked in a city centre car park, and then drove to Belfast Castle, where Clyde was discovered.

Mrs Edgar said it was only when they rang the number on Clyde’s collar they realised he was the guest house’s dog.

“It’s amazing he travelled so far. We couldn’t believe it,” she said.