Dog owner shocked to find her great dane had 70 teeth

A dog owner was shocked to find that the great dane she adopted had 70 teeth. Aurora Rutledge, 31, rescued her dog Loki, who is believed to be one year old, two months ago, and decided to take him to the vet to have a routine check up. When the vet looked inside Loki’s mouth earlier this week, she found that the pup’s mouth had a total of 70 teeth – which is 28 more than the average dog. After making the discovery, the vet removed 21 of the teeth – leaving the dog with a set of 49 teeth.

£600 worth of extractions later, Loki is recovering at home in Tulsa, Oklahoma, and is on a strictly soft-food diet to help his mouth heal. Aurora, a bar owner, said: ‘I had taken him to our local vet as a routine check up since he was a new rescue and mentioned to the doctor that the people we got him from mentioned that he may have retained baby teeth. 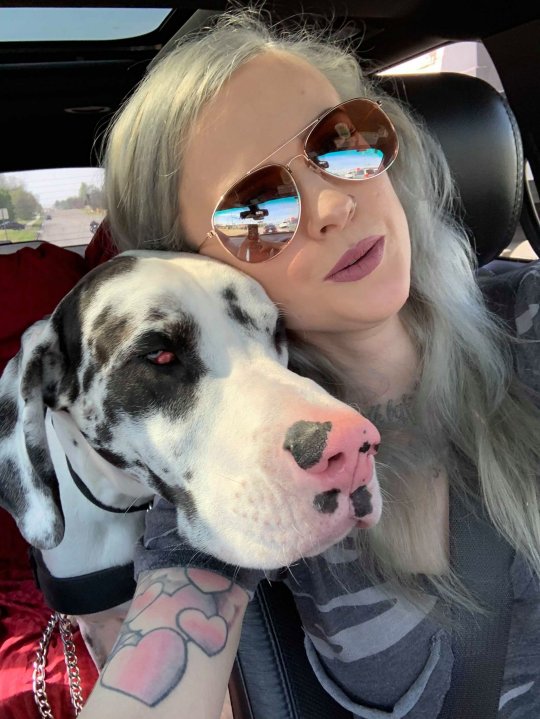 ‘Loki is a giant puppy and is very energetic – so I hadn’t had a chance to look inside his mouth myself beforehand. ‘When we did get a chance to have a little look we could see he had more than normal, but we didn’t think he’d have 70 teeth in there! ‘The vet administered dental extraction onto Loki and removed 21 of his teeth, leaving him with 49 – which is still seven more than average. ‘It was something that massively shocked us, but we’re just so glad that he is home and recovering now.’ Aurora, a mother-of-three, explains that Loki suffered with hyperdontia – but vets were shocked to see it to such an extent. She said: ‘Hyperdontia is a genetic anomaly, but it is never usually seen to such an extreme as this. ‘The vet cannot rule out that he may have this as a result of poor breeding – so the rescue we got him from is working hard to track down his breeder to hopefully stop something as painful as this happening again.

‘The night of and morning after the procedure were rough – he bled all over my couches, rug, kitchen, dog bed, me. ‘We had to give him a medication to make him sleepy, so he wouldn’t be up and around. ‘Right now he’s still on soft food and transitioning him to more solid kibble slowly. ‘After this, as far as dental goes, hopefully after all is healed, he will not even notice he had so many additional teeth! ‘We will make sure he has his routine dental checks, especially since they did leave seven more teeth than average.’