Coast guards help in search for another DogLost dog

A search for a missing dog had a happy ending when she was reunited with her owners.

West Bay Coastguards were called out on Friday afternoon after the dog, a red female Dachshund called Darcy, had gone missing on cliffs east of Seatown.

Darcy was last seen on the coastal path near dense undergrowth close to the cliff edge. Her owners had been looking for her most of the day, but called the coastguard for help when they began to fear she had gone over the cliff edge.

A spokesman for West Bay Coastguard said: “Six rescue officers from West Bay including the teams SO (Station Officer) and DSO (Deputy Station Officer) quickly responded to the station, picked up their equipment and rescue vehicle, then headed for Seatown. 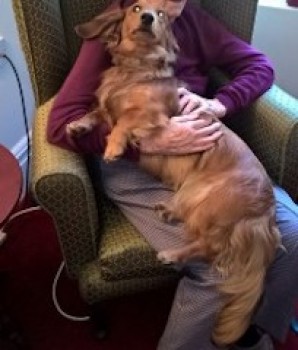 Once on scene, the OIC (Officer in charge) spoke with the dogs owners to understand the general area where she went missing.

“Two officers were then rigged with cliff harnesses and a number of roped safety systems were put in place allowing them to approach the cliff edge and carry out binocular searches of the face below.

“This was repeated at various locations but unfortunately Darcy was not able to be found.

“After also checking some area’s of cliff top undergrowth, the officers were then stood down to return to station.”

An appeal shared on Facebook to find Darcy last night was shared by more than 170 people.

This morning, Darcy’s owners contacted the coastguard to say they had been reunited with their dog this morning when they had gone back out to look for her close to where she had disappeared.

The coastguard has shared some advice of what to do to help keep dogs safe, and what to do if they go over the cliff edge: