Starting on 27 November at 3pm, Channel 4 is shining a light on the work of Dogs Trust, the UK’s largest dog welfare charity, following their efforts to find new homes for unwanted and abandoned dogs. The series features four of their rescue centres across the country and includes multiple stories of different dogs in a variety of difficulties, including blind and deaf dogs, pregnant pooches and puppies illegally imported onto our shores.

The series also calls upon the skills and resources of DogLost, a national lost and found service, which relies upon its website and dedicated volunteers to search for missing dogs. The series tracks real-time stories of dogs that have been lost, accompanying their owners’ efforts to find them and the volunteers who help them on their search. The methods and results are astounding but the first 48 hours when a dog goes missing are often make or break. 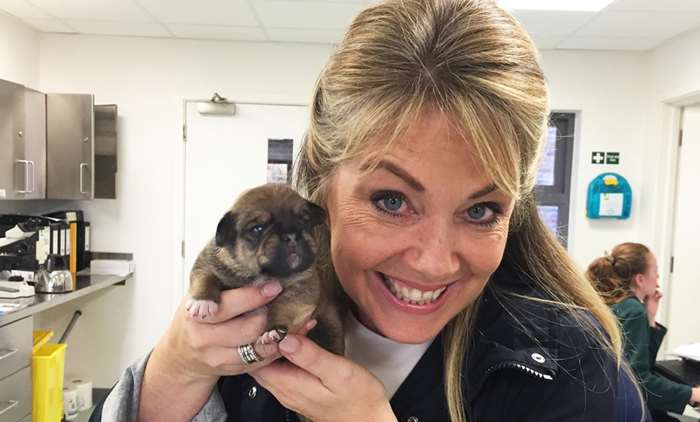 It’s presented by dog lovers Simon O’Brien (Find It, Fix It, Flog It) and Lucy Alexander (Best of Both Worlds). Starring in the series will be:

Crème the Labrador has been missing for four days and, despite regular sightings, still hasn’t been found by her distraught owners. A baited cage is their last hope of catching their panic-stricken, disorientated dog but will it work?
Lucky the crossbreed. Arriving as a stray will this pooch line up a heavenly new home following a visit from nun Sister Shelia? Except she hasn’t told the rest of the convent!
Heavily pregnant Pug cross  who introduces five new tiny additions shortly after crossing the threshold in Manchester, what does their future hold?
Cookie the Staffordshire bull terrier disappeared when he was let out before bed. His owner Remi is patrolling the local area with her toddler and launching a social media campaign to try and track her beloved dog down but after days without sleeping, will a new lead bring Cookie home?
Overlooked Saffiki the American Bulldog. Will this bouncy 30kg pooch – who thinks she’s a lap dog – find owners with a big enough heart, and home, for her?
Crossbreed Ida who arrives in Basildon at risk of amputation. Will a course of hydrotherapy strengthen her muscles and prevent her losing her leg?
We also follow the journey of mini Dachshunds Teeny and Tiny who’ve been seized by Customs officers at Dover as they recover from a terrible ordeal and hope to find new loving and safe homes.

Jayne Hayes, Founder of DogLost said: “Hundreds of dogs go missing every week and cases are rarely the same. Some go missing from home, on walks or even escape cars on their way to a new life. Owners are frantic and dogs can quickly return to the wild. Our website creates a page and poster for every dog and automatically alerts local members and organisations, and our social media outlets. Our trained volunteers offer advice and support and organise searches to hopefully reunite the dogs with their owners.”

Adrian Burder, Chief Executive of Dogs Trust said: “Lost and Found shows the variety of dogs that Dogs Trust cares for on a daily basis. No two days are the same, and likewise no two dogs are the same, they each come with their own story. For those that are found as a stray we need to spend a bit more time working out their background and what they want in a new family, but once the team do and they’re able to match the dog with a new owner, the joy is immeasurable. We hope that the show will demonstrate that Dogs Trust has shapes and sizes of dog to fit any home and hope that people will think rescue when considering their next four legged addition to the family.”

The twenty-part show is produced by Hat Trick Productions, the production company behind Rich House Poor House, Have I Got News For You, Outnumbered and Dinner Date, and will air on Channel 4 at 3pm, (every week day) up to Christmas so set your boxes! It will also be available on Channel 4 +1 and All4.

Combining tear-jerking poignancy with heart-warming tales of human and animal endeavour, Lost and Found promises to be compelling viewing for anyone who’s ever loved (but not necessarily lost) a dog – or anyone who’s ever walked past a missing dog poster, wishing they could do something to help, and wondered whether there was a happy ending.