Remember Buddy the dog who was called too ugly to love? The nation sighed in relief when the white lurcher found what he thought was a forever home some years ago. Unfortunately though the deaf dog with two different coloured eyes has found himself once more looking for a new home as his owner has passed away. Now Dogs Trust are looking for new owners for Buddy who has been without a home for most of his life.

Buddy came to Dogs Trust as a stray in 2014 and spent two years with the charity, overlooked by potential new owners because of his unconventional appearance and deafness. But his luck changed in 2016 when he was adopted by widower Chalmers Moffatt who was looking for company after his wife died. Buddy and Chalmers got along like a house on fire, going on long walks together and snoozing on the sofa. After Chalmers’ death, Buddy has been returned to the charity where he now waits for new owners. 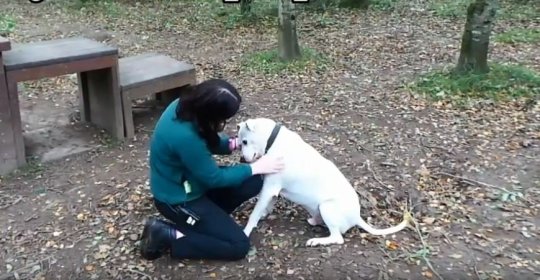 We are so sorry to see Buddy back with us, especially in such tragic circumstances, but we are so grateful that he has such a wonderful couple of years with Mr Moffat,’ said Dogs Trust West Calder manager Susan Tonner. ‘Eight-year-old Buddy is now in his twilight years, having spent the majority of his life without a family, so we do worry that he may end up being with us for a while again and adopters may over look him in favour of more conventional-looking dogs. ‘He struggles going up stairs and hills due to mild arthritis in his elbows and would prefer a quiet rural home with patient owners who will help him settle in.’