Bopper the Whopper on hunt for home after weight loss

A border collie known as “Bopper the Whopper” is ready to be rehomed after shedding 10kg (22lb).

Twelve-year-old Bopper weighed almost 50kg (8st) when he waddled into Gables Farm Dogs and Cats Home in Plymouth in November.

Staff are looking for a home local to the shelter so they can keep an eye on his weight.

“He’s such a loving dog and he deserves to be the centre of someone’s life,” deputy manager Ruth Rickard said.

Bopper, who was rescued by the RSPCA when his owners became too ill to look after him, was twice the size he should have been when he arrived.

He is about halfway through his weight loss journey and his new owners would need to keep up his special diet, Mrs Rickard said.

She thinks it will take three months for the chunky canine to reach his target weight of 27kg (4st). 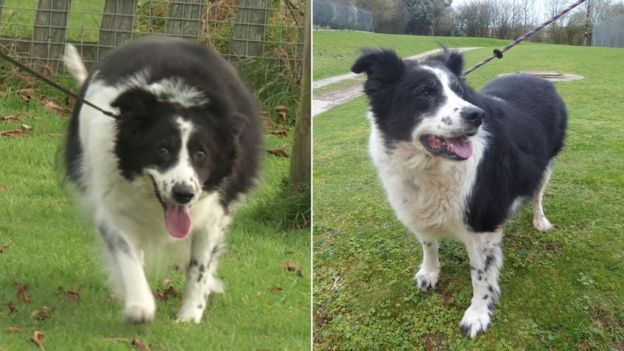 Bopper was about 10kg heavier than the shelter’s other hefty hound “Hattie the Fatty”, who also made headlines for her huge frame.

Hattie has since been rehomed by Mrs Rickard after the pooch shed half her body weight.

Staff said Bopper was looking for a quiet home without cats but he could live with children and older dogs.

Any potential owners would need to visit him at the shelter over a number of weeks to build up a bond with him.