×
Home / Volunteers / …And another volunteer of the week award goes to…

…And another volunteer of the week award goes to…

Read the full story here of her rescuing Molly after many months of Molly avoiding capture….What a star. 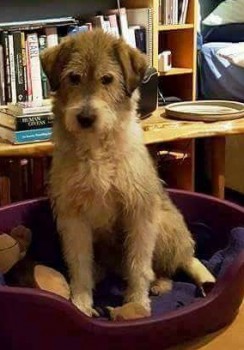 For the non Facebook users:
Rescue success!! After the good luck with the cats the week has only got better. Many of you will know that for the last 4 months we have been trying to catch a dog called molly. Molly is a terrified dog who was in rescue with another organisation and after finding her a foster home she unfortunately escaped. When we heard she was missing we offered our help to the rescue in taking on the task of securing her again. A highly intelligent, frightened dog who only knew humans as a negative and was used to living outside, we realised instantly this was not going to be one of our simple captures. With help from sightings given to us we managed to track her. In her 4 months living wild she has covered 6 towns. We have been there all the way setting up feeding stations and traps in the hope of catching her. So many kind members of the public letting us use their gardens or helping us in our work. We have monitored her with cameras gathering endless amounts of footage. Although knowing she was clever we could never have imagined just how clever. She knew how our traps worked and would eat without setting them off or avoid them totally. We spent so long building her trust where she would be waiting when we arrived with food, keeping a fields distance most of the time, for a quick get away if we did not leave fast enough. Spending countless days and all through many nights sat hoping for her to get caught in the trap.
Unfortunately many people who did not know mollys story thought she was a normal missing pet and would try to catch her and chase her which caused her to move on away from us or get more nervous.
She took a liking to an old pig sty which i spent many days and nights sat in freezing cold with a rope system in place to shut the door on her. But she would not go through the door if she knew i was around and would tease me by walking past to say hello.
But eventually we found a quiet patch of woods in coxley where she seemed to settle. Here she was happy to come and go day and night and slowly but surely got more used to the trap. Just as we thought we were nearly there fireworks scared her off into glastonbury and then street. It was soul destroying and we thought we would have to start from scratch. But amazingly as we had just started to lose hope she managed to find her way back as if she felt at home in the set up we had made. Knowing the carnival was coming and that she would be hungry we wanted to make the most of this opportunity and set the trap again. Staying all day and night we finally heard a clang just after midnight. We raced to the trap to find her in it and hearts racing managed to get the trap into our van and get her safely to the shelter. Once back we could go about cutting the lead she still had around her neck and getting her warm and safe.
I want to take this opportunity to thank everyone that have helped me and lyn.
The most huge thanks to nick haselwood who has been my amazing support spending many days and nights sat in the cold bored stiff, trapsing fields and woods. Feeding, monitoring, planning, and generally putting up with my stubborness to never give up. What a team the 3 of us have been.
Thank you to those who have given help with sightings or allowed us to use their land.
A massive thankyou to the brownes of brownes garden centre coxley and all of the staff. Letting us set up our area and then spending days sat there. What a super place this is with truly wonderful people. The support and help they have given has been more than i have ever known. I just cant put into words how totally amazing they have been and urge you if you are local to visit them. 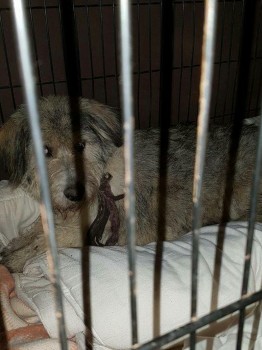