×
Home / News / A loyal dog has died after sleeping at his master’s grave every night for 11 years.

A loyal dog has died after sleeping at his master’s grave every night for 11 years.

The black Alsatian was some four years old when Miguel Guzman, who had bought the dog as a present for his son, Damian, passed away in 2006 in Villa Carlos Paz, near Cordoba, Argentina’s second city.

The dog disappeared not long afterwards and the family thought he had found a new home or had been killed.

But several months later, on one of their visits to the cemetery during 2007, there was Capitan. To their astonishment, neighbours told them how they started to feed him when they realised he slept by the grave each night.

And so the grieving hound continued his sad vigil until dying himself a few days ago at about 15 years of age, the daily newspaper La Voz reported.

What amazed the family the most was that the cemetery was a long way from where they live and Capitan had never accompanied them there before he disappeared.

ix years ago, Mr Guzman’s widow Veronica, reflecting on the pet’s graveside vigil, told Argentina’s Cordoba newspaper: ‘We searched for him but he had vanished. We thought he must have got run over and died.

‘The following Sunday we went to the cemetery and Damian recognised his pet. Capitan came up to us, barking and wailing, as if he were crying.’

She added: ‘We had never taken him to the cemetery so it is a mystery how he managed to find the place.

‘We went back the next Sunday, and he was there again. This time, he followed us home and spent a bit of time with us, but then went back to the cemetery before it started getting dark. 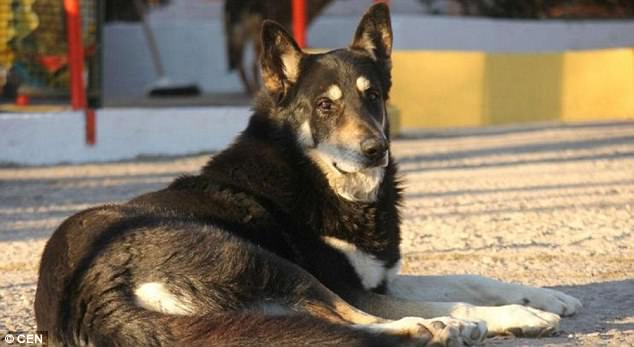 The cemetery’s director Hector Baccega added: ‘He turned up here one day, all on his own, and started wandering all around the cemetery until he eventually found the tomb of his master.

‘During the day he sometimes has a walk around the cemetery, but always rushes back to the grave. And every day, at six o’clock sharp, he lies down on top of the grave stays there all night