It’s the announcement we’ve waited all year for: which hardworking animal will win 2018’s Pet Slimmer of the Year award? This time around, there are two joint winners. The grand prize has gone to Borris, a Cavalier King Charles spaniel, and Sadie, a Labrador. Both dogs have lost a quarter of their starting body weight through diet, exercise, and determination. Borris started the year at 4st 6lb – four times as much as a healthy dog of his breed should weigh. He now weighs in at 3st 4lb. His owner Annmarie Formoy admitted that the family had fed him too many treats in the past, and that his lovable nature meant even strangers would give him snacks. The hungry boy’s appetite has got him into some scrapes. He once raided a cupboard full of chocolate Easter eggs, and another time chewed up Annmarie’s dad’s false teeth. 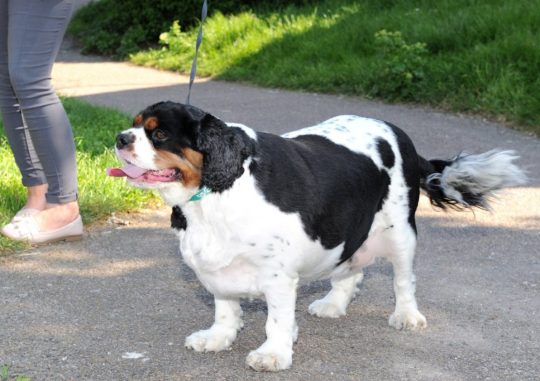 His weight loss was supervised by Louisa Carey, head nurse at Margate PDSA Pet Clinic. ‘Borris’s weight loss has been amazing,’ said Annmarie. ‘In the past his belly used to be touching the ground and he would refuse to walk. ‘Now he loves his walks – even when it’s raining, which he used to hate.