The pair found the man drinking at a friend’s house when he ran off, causing PC Sweeney and PD Logan to chase him.

The man drew a pistol and shot Logan in the head, before struggling with PC Sweeney, who was also shot with the gas-powered pellet gun.

Logan was shot in the mouth and nose three times, suffering puncture wounds.

Despite the man shooting the dog, still having a weapon and knowing he wasn’t afraid to use it, PC Sweeney continued to tackle him. 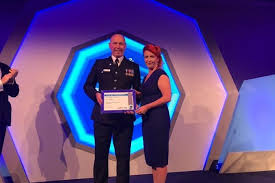 PC Sweeney then tended to Logan’s injuries, before seeking treatment for his own.

The pair were named as the Region 2 North East winner at the 24th national Police Bravery Awards, held in London on Thursday night.

PC Sweeney said: “The cuts they’ve healed up, but you rely on your family to help you out. The dogs help you more than anything because they keep you going. If you’re a dog handler it’s your life – it’s not a job, it’s your life. You spend 18 hours a day with your dogs – I mean a dog handler never has a bad day – they bring you along. It’s an absolutely fantastic job to do, I feel privileged.”

Read more: Crime and homicides across Yorkshire rise – but how did your police force rate?
John Apter, National Chair of the Police Federation of England and Wales said: “These awards highlight the incredible bravery that police officers show every single day. PC Sweeney demonstrated outstanding courage and dedication, putting the lives of others before his own without a second thought.”