A PET owner who kept 30 dogs in filthy conditions was sentenced and banned from owning animals for life after three starving animals in her care had to be put down.

Elaine Erskine, 58, who kept German Shepherds, Rosie and Arti so malnourished they were “on the brink of death” pleaded guilty to causing unnecessary suffering under section 19 of the Animal Health & Welfare (Scotland) Act 2006.

Ms Erskine was sentenced to 14 weeks at Kilmarnock Sheriff Court on October 2 after an investigation by the Scottish SPCA.

As a result of the “horrendous” living conditions the animals encountered in their home in East Lodge, Kilmarnock, East Ayrshire, the two German Shepherds were put to sleep and a female Jack Russell terrier was euthanised.

Inspectors arrived to a “state of disrepair” when they entered the home in Scotland.

“The property the dogs were housed in was in a state of disrepair.

“The flooring was not visible due to the amount of rubbish and faeces, and the smell of ammonia was overpowering.

“It was clear the property was not fit for dog or human inhabitation. 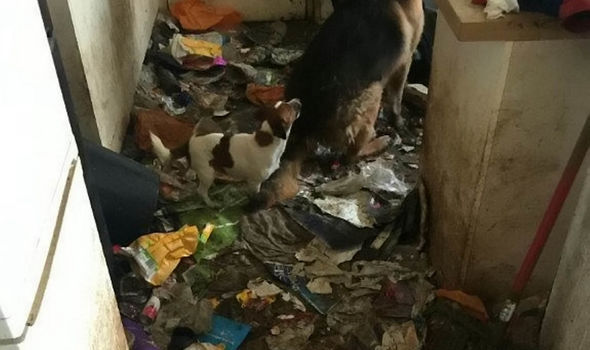 Whilst assessing the “extremely emaciated” animals a vet gave the dog a body count score – a visual assessment of an animal’s health – of just one out of nine.

“She had wounds to both back legs and the bones in both legs were clearly visible.

“This dog, which was given a body count score of 1/9 by a vet, was extremely emaciated and in a great deal of pain and distress and we made the unfortunate decision to euthanise her.