×
Home / News / Who could do this? The shocking picture that shames throw-away pet society

Who could do this? The shocking picture that shames throw-away pet society

The tragic crossbreed was just a third of his normal size when he was found with his bones poking through his filthy, matted coat.

Tragically, the dog is the latest victim of a sickening trend that sees heartless owners turning sick and elderly pets out on the streets rather than taking them to the vets or rescue centres.

When vets saw this dog’s pitiful state they had only one course of action but to put him out of his suffering.

Today the RSPCA inspector investigating how the small, brown-coated crossbreed was dumped to die hit out at the culprits.

RSPCA Inspector Helen Smith said: “For someone to purposefully dump this poor, dying dog in such a state and leave him to suffer a slow and painful death is absolutely despicable.

“It absolutely breaks my heart to think about him lying on his own, frightened and in pain, for goodness knows how long. I can’t believe that anyone would treat an animal in this way” 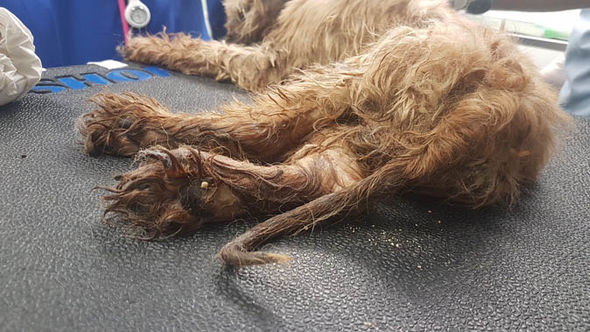 The abandoned dog, thought to be middle-aged and weighing a mere eight pounds, was neither microchipped nor wearing a collar or identity tag when he was recently spotted by a passerby in Walton Lane, Anfield.

Although the dog was rushed straight to the vets, he was so badly emaciated and hypothermic that there was no option but put him to sleep.

“He was in a dreadful state, explained Inspector Smith. “Vets said he had a body condition of one out of nine – the lowest possible – and had no muscle mass left on his little body.

“He was so emaciated all of his bones were visible. His coat was badly matted, he was covered in his own faeces and urine, and had urine burns all down his legs.

“It’s heartbreaking to think how long this poor dog had been suffering like this and, if he hadn’t been found, how slow and painful his death might have been.”