Dogs are always picking up all sorts of food, balls and twigs in the park. So when a Labrador puppy played tug of war with a stick while on a walk with her owners, they didn’t realise she would end up with potentially life-changing injuries. Corona, one, was out with her owners, Pauline and Pete Cook, both 59, in the woods when she wolfed down the stick last month. But the couple didn’t realise something was wrong until Corona threw up blood later that night and rushed her to the vets.

A CT scan at Paragon Veterinary Referrals, in Wakefield, West Yorkshire, revealed the stick had punctured her oesophagus. She was immediately operated on by vet Mickey Tivers who removed the stick by cutting into the dog’s chest.

Corona had to stay at the vets for eight days after her surgery and the Cook’s say they’ll never throw a stick for their dog again. Mr Tivers is now urging dog owners not to throw sticks for their pets and said injuries from them are not only common but can be very serious. He said: ‘Corona suffered a very nasty injury from the stick. ‘It was very serious, as the oesophagus does not always heal well and there was significant risk of infection.’ He warned if a stick lands inside the dog’s system at a certain angle, they can impale themselves. The vet added fragments of stick can get lodged in the neck, which can lead to abscesses fr. 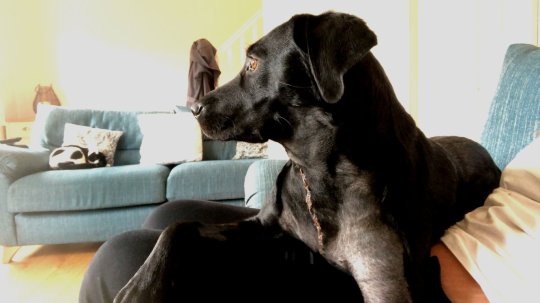 He said: ‘Our advice would be never to throw sticks for your dog as there is a real risk of injury. ‘We would encourage owners to throw balls or other toys, or rubber sticks, which make an excellent alternative to their dangerous wooden counterparts.’ Speaking of the incident, Pauline said she heard a ‘horrific noise’ come from Corona but couldn’t find anything wrong with her, until she was sick later that night. She said: ‘We saw blood in her vomit, so they took her to Blue Cross in Grimsby where X-rays found evidence of the injury, which required the immediate referral to Paragon. ‘Mickey is the most impressive vet I have ever met. He has so much compassion and so much pride in what he does. ‘After we left Corona with him, I just felt so much better.’

Pauline said she could never put it into words how grateful the couple are to the doctor for saving their puppy’s life and said Corona is now on the mend. The owner said: ‘She has recovered so well. She has probably calmed down a little bit after her op, as she was very, very lively before, but she is still running around after balls and stealing socks. ‘We’re just overjoyed to have her back. We were heartbroken when we thought we might lose her. ‘We will never throw a stick for her again.