A vet has been reprimanded after a dog was left to die overnight despite having emergency surgery just hours before. Kiwi, an 11-year-old German Shepherd – Wolfhound cross, was rushed to the vets by his owners Penny and Anthony O’Callaghan to have treatment from an urgent stomach condition. They said they picked Riverside Veterinary Practice in Spalding, Lincolnshire, because it was advertised itself as a 24/7 operation. At the time of the incident, the practice stated on their Facebook page: ’24 hour care is provided at OUR practice, with OUR vets.’ 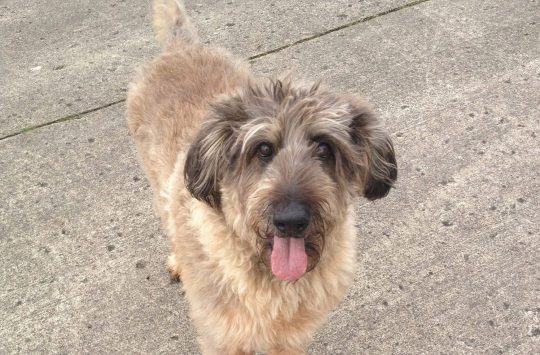 The vet, Elizabeth Law, successfully performed emergency surgery on Kiwi, but then left him to recuperate on his own for more than seven hours overnight.

Kiwi was found dead the following morning, leaving the Callaghans devastated. In its decision, a disciplinary panel at the Royal College of Veterinary Surgeons said Miss Law – who has been a vet for nine years – had made a ‘serious mistake’. However, the practice was cleared of dishonestly claiming it offered a 24/7 service after arguing that this simply meant vets were available to be called out at any hour. The ruling has infuriated Mrs O’Callaghan, 41, who claims that the Riverside practice had been ‘let off the hook’. She said: ‘We have been pet owners for 20 years and we know all the right questions to ask when we sign up to a surgery. ‘The crucial thing is that my pets can be offered 24-hour care.