Unbelievable!’ Dog owner rages at culprit who cut off pooch’s ear outside Tesco

The incident happened on September 21 between 5.30pm and 8pm, with Mr Ballantine telling the publication he does not think it was done by accident.

He said: “I went in and did the shopping. I bumped into an old friend, which kept me talking for quite a while.

“I came back out, got down and the three dogs were all over me. I sorted out the shopping and it didn’t seem like anything had happened.

“I got home… and I discovered that part of Cole’s ear was missing. At that time of night it’s hard to get a vet. So I cleaned him up and it had stopped bleeding.”

He added: “First thing the next morning I went down to the vet and they couldn’t believe it.

“The vet couldn’t believe how clean the cut was – she thought it might have been a razor or blade.

“She checked it out and we’ve just got to be careful to keep his ear clean and to look after him.” 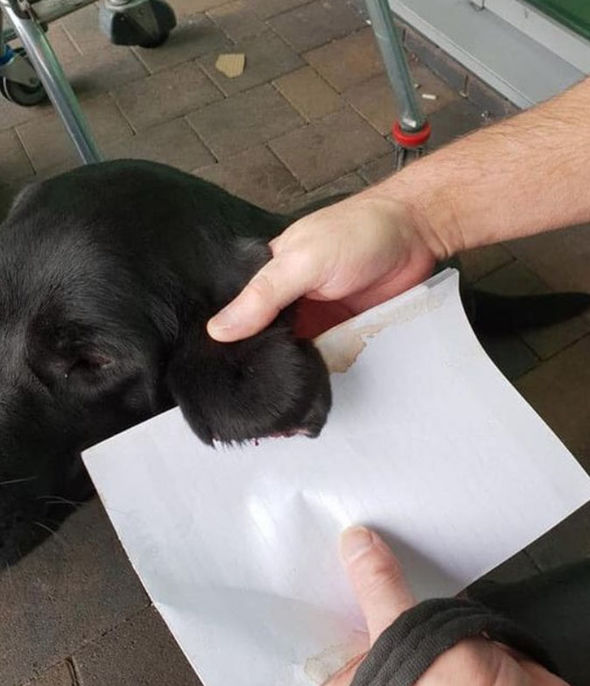 Mr Ballantine said as a result of the horror attack, the black Labrador has become more “withdrawn” around people.

He said: “He’s all right. He’s very very withdrawn from people when we’re out. He tried to shy away. Sometimes he’s not too bad but other times he just doesn’t want to know.

“I have to watch that he doesn’t go into bushes or anything like that.

“He also shook his head and let out a little cry so he learned not to do that again.”

Mr Ballantine also shared a message he has for those responsible…

He said: “I would ask, ‘Why?’ Can they give me one reason why? What goes through somebody’s mind? Unbelievable.”

A police spokesman said: “On Sunday, 26 September police received a report of a dog having sustained an injury to its ear when its owner had left it tied with its lead in the underground parking area of a local shopping centre in Bangor on Friday, 21 September.”