Passengers experienced a train journey from hell after a dog suffered an “explosive bottom” in the middle of the aisle.

Train-goers on the packed journey were forced to use magazines to weigh down the paper laid on top of the mess by train staff, who did not actually clean it up.

Travellers were left gagging from the stench for four hours until the train reached its destination.

The incident happened on the Great Western Railway (GWR) service from Devon to London on Sunday.

Florence Beasley, 23, from London, has formally complained to GWR after spending £36.15 for her disastrous journey from her home in Newton Abbot, Devon. 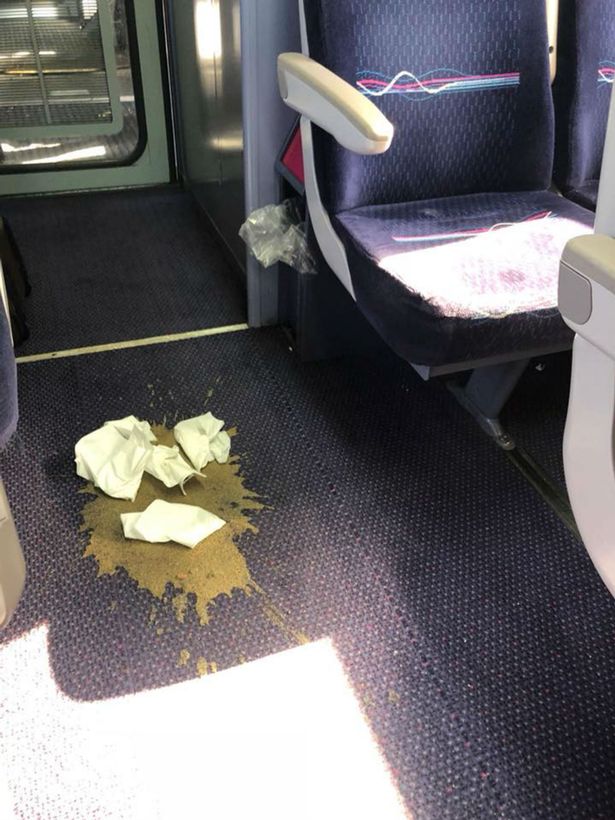 Taking to Facebook, Florence shared photographs of the mayhem on board.

She wrote: “This happened on my train home today. He had an explosive bottom.

“He wasn’t embarrassed. He admired his work for several hours after that. 0/10 bowel control. 13/10 would not like to sit near this for four hours again.

The first photograph shows a large puddle of brown mess in the aisle of the train – with some pieces of tissue strewn across the top.

Florence explained that this was done by a father who had young children with him in the compartment, in a vain attempt to cover the smell.

The second photograph shows a pile of blue roll tissue placed over the top of the mess – while the poor dog stands in the background staring at it. 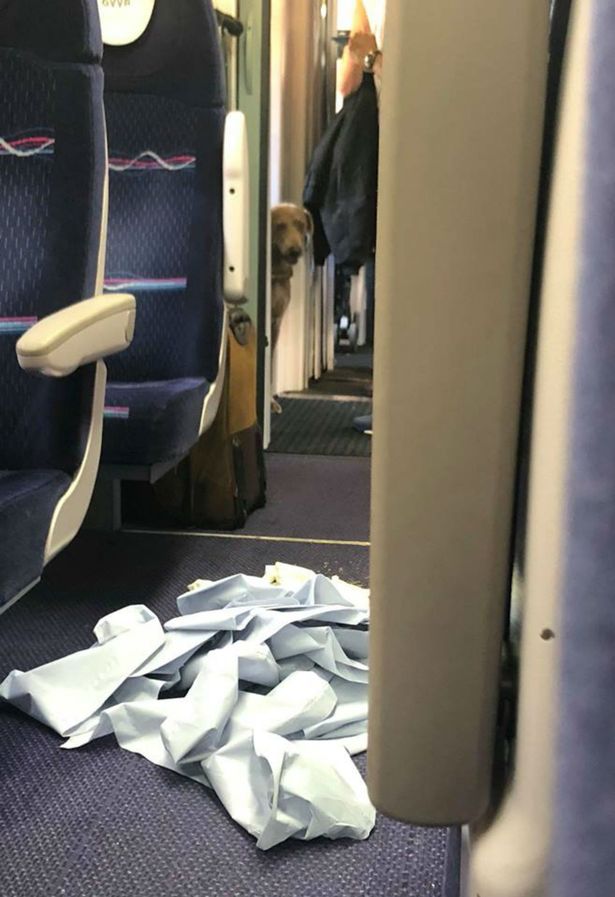 On social media, Magdelaine Folk said: “Can you imagine?”

Katie Munro added: “I would literally die if this happened on the commuter rail.”

David Galban commented: “I can smell this picture.”

While Hannah Hammer said simply: “What a disaster.”

Florence has since lodged a complaint with GWR due to the incident. In a letter to the train line she wrote: “Within 20 minutes of departing a dog had explosive diarrhoea in the aisle. The train was full and there were no staff in sight.

“The owner stayed at the scene to try and warn people not to step in it. After five minutes of me knocking on the staff door as the cafe was closed someone finally answered and didn’t attempt to give anything to clean up or cover with.

He said he’d be up in a minute to check the situation. 75 minutes later when we got into Bristol the train staff appeared and said there were no staff to clean it up.

“It is utterly appalling that we were made to endure these conditions and ignored by train staff.”

Speaking today, Florence said: “In all honesty I have grown up on a farm and around dogs so I’m used to it, but being in such a confined space is difficult when that happens and I had to sit next to it for a long period of time because the rest of the train was full.

“I saw the father pass the baby back to the mum thinking it needed a nappy change due to the smell. He was between gagging and laughing.”

She added: “I mostly felt sorry for the owner. The staff weren’t willing to give anything to help him clean up which he would have done had he had cleaning products.

“A few bits of blue roll was all they gave us, but having the windows open on the doors made it windy which meant the blue roll was travelling with poo stuck to it so we got the train magazines to weigh it down.”It was just appalling they didn’t have anything on board for that kind of thing. I’m pretty sure had it been a baby or a person they would have cleaned it or at least given products.”

Florence said she felt for the dog owner who apologised to his fellow passengers. She said: “He was very embarrassed but I chatted to him a little and told him not to worry. It doesn’t make a difference if it’s a dog or a baby.

“He was travelling solo and the dog seemed perfectly happy before it pooped everywhere. He was accepting pats and wagging his tail.”

A Great Western Railway spokesman said: “We are aware of this incident, and have apologised to customers affected.

“Staff on board moved customers away from the immediate affected area as soon as they were made aware, and did all they could while waiting for specialist equipment to become available.”

Ever Had An Interest Only Mortgage? Read This…MORTGAGE.CLAIMS

Play this for 1 minute and see why everyone is addictedTHRONE: FREE ONLINE GAME

Incredibly Brilliant Way To Check If You Had PPIALLAY

Look what this man found roaming around his gardenHULL DAILY MAIL

12 HOURS AGO
ote
haha the peak-a-boo look on the dog’s face is priceless. I always take a couple  pp dog pads, tissue, water and wipes (takes up no room in a bag) whenever I take my dog anywhere. I know it would be an unpleasant scent but it’s funny story : )
2
0

13 HOURS AGO
NeilBlakeley
The only dogs that should be allowed on public transport should be guide dogs.
3
10

14 HOURS AGO
yayaaaaa
i bet that stunk, could have used metro
0
0

16 HOURS AGO
Greer
I hope the poor dog feels better soon, given how short dog digestive systems are, the  sudden illness must have taken both the dog and its (obviously mortified) owner by surprise.  Poor show on having no cleaning materials available, it’s not just explosive dogs that can happen on trains to make them a grim place to be!
12
3

This Unearthed Photo From Dubai Has Not Been Edited – Look CloserNINJAJOURNALIST

Macaulay Culkin Opens Up About What Happened At Neverland RanchICEPOP

What are Web Design Prices in 2018?WEBSITE DESIGNER PRICES

Top 10 Cars To Buy This YearCARBUYER

by Taboola
Sponsored Links
RECOMMENDED
Police dog risked his life to save officer: ‘Even as Finn lay bleeding, he licked the wound on my hand’
Puppies discovered living alone on Canadian island being compared to dog version of ‘Gilligan’s Island’
Are these bizarre animal facts true or false? See if you can sort fact from fiction with this quiz
ADVERTISEMENT

RECOMMENDED
A heart-warming gallery of some of our wonderful four-legged supporters of Lucy’s Law
Owning a pet INCREASES your chances of being happy and successful
Meghan Markle’s furious ex-husband has ‘slammed’ the duchess – and could still speak out about her
New Brunswick shooting: Four killed in Canadian city as police warn residents to lock their doors