Therapy dogs have helped patients at a children’s hospital so much staff are calling for them to be used in wards across the country. A pioneering study at Southampton Children’s Hospital showed an ‘overwhelmingly positive’ effect on children nervously awaiting medical procedures. Children who were previously scared of dogs said they felt less nervous around them since the visits. The report published in the British Journal of Nursing said three dog handlers and five golden retrievers were used across the hospital.

The friendly dogs were assisted with nursing care and distracted children during blood taking, radiology examinations and other procedures. The survey of 200 staff and patients over a year showed no concerns were raised about the presence, behaviour or cleanliness of the dogs. Every single person who took part said they thought the dogs should be used in hospitals across the UK.

A spokesman for University Hospital Southampton NHS Foundation Trust said since the study the same team of dogs have been used to support paediatric patients awaiting surgery. Well trained golden retrievers cheering up children in hospital might seem like no-brainier – but the study is an important step in getting hard evidence in support of the practice. 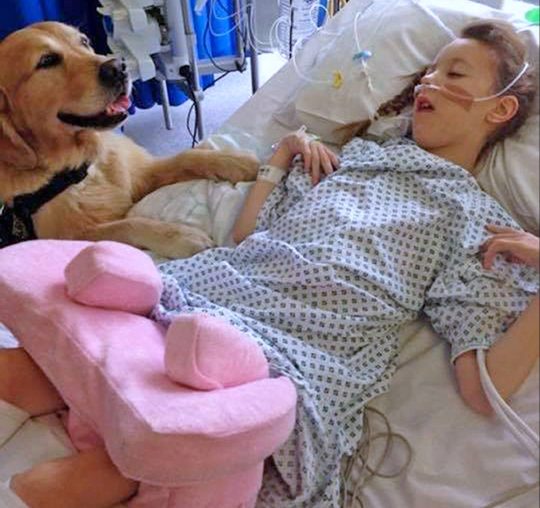 Lead therapy dog handler at Southampton Children’s Hospital Lyndsey Uglow said: ‘While we had received constant positive anecdotal feedback from patients, families and staff, to really establish AAI in the healthcare setting we needed to strengthen the evidence behind it,’ ‘The results of this survey have confirmed that the initiation of a formal therapy dog service in an acute UK children’s hospital environment has been overwhelmingly positive and supported by patients, parents and staff. ‘We understand a therapy dog visit would not be appropriate for every type of patient however, where it is possible, the results of this study show that patients, staff and visitors enjoy the benefit of the human-animal bond when they see one of our dogs on the wards.’