×
Home / News / The couple who care for stricken dogs in an Indian beach town.

The couple who care for stricken dogs in an Indian beach town.

During a 10-year exile in India, a British couple have spent £300,000 of their own money to help stricken dogs in a beach town. Why?

It was supposed to be a trip to see some of the world after taking early retirement.

After spending some time in Gran Canaria, Mary and Steve Muscroft booked a two-week package holiday to Kovalam in Kerala, south India.

They did not get on their return flight.

Instead, they stayed to look after two dogs that had captured their hearts.

Ten years on and they now have almost 100 dogs, run an animal clinic with three staff and have set up Street Dog Watch Association – an organisation that rescues stricken dogs and feeds, vaccinates and sterilises the area’s strays.

“In no way did I envisage this would be my life,” says Mary, a singer and former RSPCA volunteer from Middlesex.

“But we were never going to just sit and read and eat and drink. I don’t think anyone would ever have planned this though – that would be crazy.”

Before retiring, Steve, 59, had run a manufacturing business in Bradford.

“We weren’t well off but we were comfortable so we decided to retire while we were young enough,” he says.

“We didn’t have any set plans other than seeing a bit of Europe.”

The couple’s first aim had been to see if they could adjust to a life without working.

“But we came here for a two-week holiday and fell in love with two rescue pups,” Steve says.

“The whole thing just snowballed. Two dogs became six, then became 12 and on and on.”

It wasn’t long before the couple started to go out and feed the street dogs of Kovalam, a resort with palm tree-lined beaches by the Arabian Sea.

The feeding round got so big a rickshaw was hired to carry all the food needed for the 15km (9 miles) trip.

Puppies would be found and brought back, and locals started to leave dogs at their gates.

“We found six puppies left in a plastic bag once,” Steve says.

And so began a life of sitting up through the night nursing and feeding dogs and willing them to get better if they were ill.

Their dogs are housed in four large shelters, with up to 25 to a shelter.

A typical day begins by getting up and cleaning up.

“We get through a lot of pooper scoopers,” Mary says.

The dogs are fed and watered and checks are carried out to make sure they are healthy.

Between 11am and 3pm it is so hot – the temperatures regularly get into the 30s and higher – the animals have a dognap and then at 4pm the feeding routine begins again.

Social media now plays a part, with the details of a steady stream of pups and dogs up for adoption being posted online.

However, the couple do not recommend people from the UK should try to bring a dog over as it’s too expensive and too stressful for the animal.

Anyone tempted to give a home to a Keralan dog should instead donate to an animal rescue charity, they say.

Disease is not too much of a problem in the area, according to the couple.

The couple have ploughed £300,000 of their own money into Street Dog Watch Association, most of which has gone on dog care.

They regularly hold fundraisers and have been helped by family, friends and tourists who donate money to them.

Sterilisations, which the couple first started to organise as the number of stray dogs was so high, have recently stopped as the money, donated by a friend, has run out.

When they first started, 633 dogs were counted around the beaches of Kovalam and Samudra.

“It’s not all down to sterilisation, but it’s played its part,” Mary says.

Only healthy dogs are sterilised and the idea is to put the dogs back on the street, rather than look after them at their shelters.

“But we still see them, and check if they are healthy. There’s no shortage of food and water for them, and they are free. It might be different if it was in a city,” she says.

A crowdfunding campaign is up and running, and meetings are taking place with the local government to try to have an official licence granted.

“I want Street Dog Watch to become self-sufficient and get the local authority to help with the bill. It’s so the money people give us can go on treats for the dogs, rather than on basic care,” Steve says.

It’s been hard, and the couple say they live to a basic standard – cracked crockery is the norm – but there are no regrets.

“I miss family and friends, and a good old English breakfast. I miss going to the pub and Match of the Day,” Steve says.

“But there’s compensation in other ways. There’s no ice on my windscreen and no central heating bill.

Tributes pour in for the ex-cabinet minister, whose cancer treatments campaign was praised by MPs.

‘One family’ behind Indonesia blasts 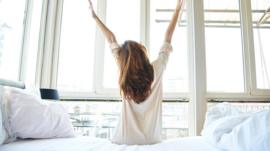 Should we all become early risers?