Lucky, an unwanted Paphos dog, has found a new home in the UK with a TV producer thanks to well-known actor Martin Clunes and the determination of a British expat resident and his wife.

Paphos resident Martyn Jones fostered the dog, aptly named ‘Lucky’, ahead of her trip to the UK. He told the Cyprus Mail that she is now living with Caroline O’Reilly, a TV and film script editor and producer in London.

“Lucky now has two homes as she lives in Wimbledon with Caroline when she’s working in London, and when she’s away, she holidays in Kent with her new owner’s father in-law,” he said.

ones’ wife, Russian expat, Katja, had started watching back-to-back episodes of top TV show ‘Doc Martin’ starring Clunes, which led to her watching another of his shows called ‘A man and his dog’, where the canine-loving actor sets out to discover the relationship between humans and dogs.

“It showed his love and passion for these animals and we decided to try and contact him to see if he would adopt Lucky. We managed to track him down and he couldn’t, but he said he knew someone who could,” said Jones. 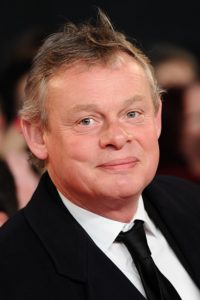 In a personal email to the couple, Clunes said: “Lucky is such a beautiful girl and her story is so sad until you entered her life. I salute you both for all you have done and I know she is going to have a great life with people who are just as nutty about dogs as us.”

The actor also paid for the dogs’ flight to the UK and O’Reilly donated 200 euros towards Lucky’s pre-flight heath and veterinary check ups.

The dog’s life could have been very different. She was initially kept on a goat farm in Peyia and subsequently tuned out onto the street by the famer, said Jones.

She was found by three Peyia residents who began feeding her and gaining her trust, but then Lucky was hit by a car and left for dead by the side of the road. She suffered a broken leg and ribs. The three residents turned to the local community to help with donations for her medical treatment.

After her treatment Lucky was fostered by Jones and his wife. The couple often foster dogs from PAWS dog shelter in Achaelia in Paphos.

“My wife, Katja nurtured her back to health and I found her new home in UK and raised funds for her,” he said.

Lucky is now a healthy dog living happily in the UK, said Jones, who is now trying to contact other celebritiesto see if they can help with his mission to help the unwanted dogs of Cyprus find new and loving homes.

“She is a true success story brought about by the terrible plight of the bad treatment of many dogs here.”

This Is Why Dogs Follow You Into The Bathroom. I Never Knew ThisWorldLifestyle

Big Razor Companies Are Terrified of This CompanyShavekit

Danish parliament bans the wearing of face veils in public

Nadal too hot for Pella as champion rolls into third round

Nicosia, get ready for Planet of Zeus

US to impose tariffs on EU steel, aluminium