This is the heart breaking footage of a stray dog carrying a cat that had just been killed by a car in an apparent attempt to protect it. Woo Yafang, 22, noticed the dog carrying the kitten’s corpse in its mouth after it was run over in Taipei, Taiwan, on July 30. The student stopped to film the remarkable incident and believes that the dog was trying to protect the cat from being eaten by other wild dogs.

Woo explained the dog would get tired occasionally and place it on the ground to rest, before picking it up again in an attempt to protect it. She said: ‘I never expected to see a situation like this happen before my eyes. The dog was protecting the body of the cat. ‘What does this say about the people who hit the cat and drove away? It was a stray dog that was willing to help to take care of the body. The dog has very real emotions.’

Woo said the dog was walking around the cat’s body for some time, which made her think the pooch might try to eat the corpse, so she stopped to see what had happened. She added: ‘The dog urinated around the cat, and I understood this was to occupy that place and not let other wild dogs close to cat. ‘It carried away the cat and would drop it from time to time when it was tired” 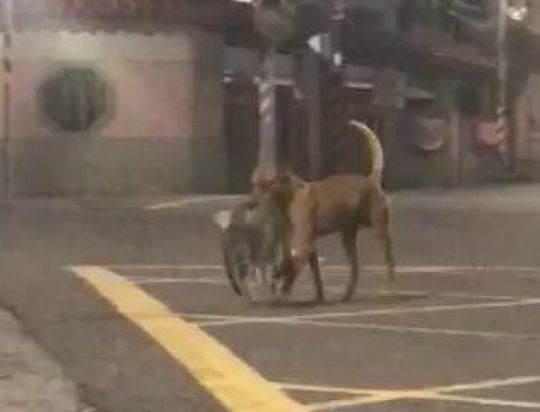 Woo said that after several minutes the dog approached her and dropped the cat’s body at her feet. She continued: ‘The dog appeared to be relieved that a person could now take care of the feline. ‘The dog went away. I am sure that they have caring emotions for each other just like humans do.’

Woo said that she called friends to ask for help, who collected the body of the cat and paid for it to be cremated. The young woman is now hoping that somebody will adopt the kind hearted stray dog. She said: ‘I’m actually angry that the people who hit the cat did not stop to take care of the cat. ‘I hope that somebody with a kind heart will adopt the dog and give it a good life.’