An animal lover has been left heartbroken after dognappers broke into her Manchester home and stole her £2,500 French bulldog after ‘watching’ her for more than a month.

Ayla Williamson, 22, found the front door of her Stockport flat wide open, the lock broken and plaster spread across the wall at 1am on September 13.

Her designer dog Winston had been snatched but the intruders had left Ayla’s gold watch worth more than £1,000 and her iPad and TV – leading her to believe they were targeting her pup. 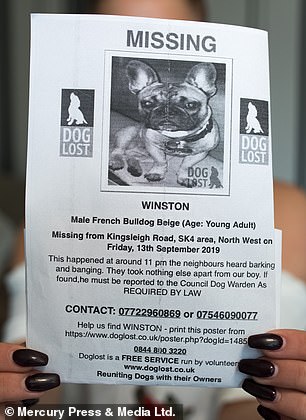 She believes they broke in between 9pm on Friday and 1am on the Saturday and has reported the incident to Greater Manchester Police.

Ayla had bought the nine-month-old ‘Frenchie’ to help her through a bout of depression and speaks about him adoringly.

She said: ‘We are devastated, we are not sleeping. Every time there is a noise I go to the door because I think it might be him.’