×
Home / Dog Behaviour / Should you let your dog lick your face?

Should you let your dog lick your face?

You love your dog so much, it’s only natural to let him lick you. And if it happens that he zeroes in on your lips, what’s the big deal? After all, you’ve heard that a dog’s mouth is cleaner than a human’s.

Except it’s not true. You’ve seen the things your dog eats. It’s no wonder dogs have their fair share of oral bacteria, making them no better than us when it comes to the microbial situation in their mouths. So you may want to think twice before putting your face so close to your four-legged buddy.

Why do dogs lick?

You may think your dog is doing this out of love, but there are a number of reasons dogs lick their owners, other dogs and even themselves, according to the American Kennel Club.

They like the way you taste. Dogs find something yummy about your sweaty, salty skin. That unique taste is also comforting because it comes from someone they love.

They’re rewarded for doing it. What did you do the last time your dog licked you? Likely you gave him attention by petting him or saying something to him, which offered positive reinforcement, encouraging him to do it again. And, as the AKC points out, licking also releases endorphins (the “feel good” hormones), which increases the benefit of doing it. 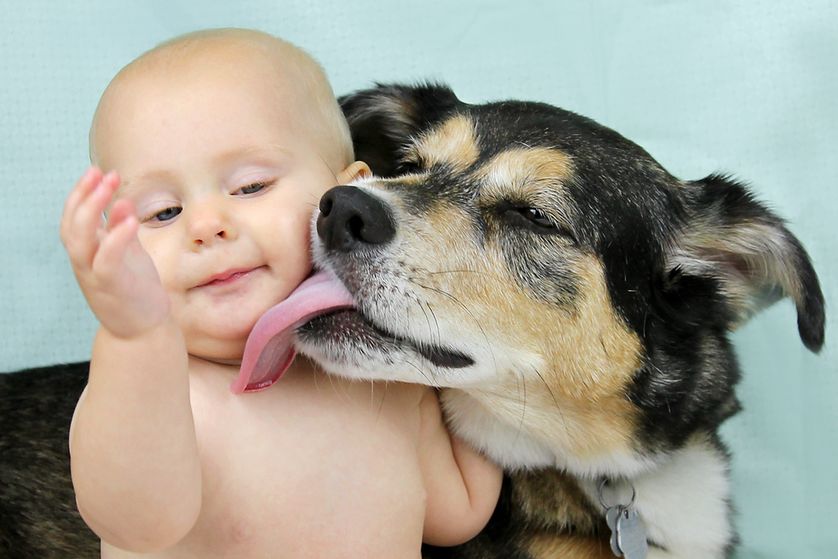 To show submission. Puppies will lick their mother’s mouth as a sign of subordination. Similarly, a dog will lick another dog (or a person) that they feel is superior to them.

For medical or behavioral reasons. A dog might lick a certain spot on his body because of allergies or other medical problems. But a dog that obsessively licks himself, a person or even an item may have anxiety or a disorder that may benefit from a consultation with a behaviorist.

Your dog’s mouth and intestines harbor all sorts of bacteria and parasites. Some of these are zoonotic, meaning they can be transmitted to people and can cause disease, says veterinarian Ken Tudor of PetMD. Some common bacteria that can be transmitted this way include salmonella, E. coli, clostridium and campylobacter, which can be found in a dog’s intestines.

Because pets lick their bottoms, these bacteria can eventually end up in a dog’s mouth and then possibly be transferred to people with a lick.

“When dog saliva touches intact human skin, especially in a healthy person, it is extremely unlikely to cause any problems, as there will be very little absorption through the skin,” Dr. Leni K. Kaplan at Cornell University’s College of Veterinary Medicine told the New York Times.

But because disease-carrying saliva can be absorbed more readily through the membranes in a person’s mouth, eyes and nose, Kaplan suggests it’s best to avoid letting your dog lick those parts of your face. It’s rare that illnesses are spread that way, but it’s still a wise precaution.