When I got the message that a cat was missing from Sea Mills I immediately set to work….lots of advice for the owner Laura Page and how to remain calm during such a stressful time! I didn’t appreciate the size of the cat until the photos came through and immediately realised my cat trap was too small!….so I called on another member of our team Katie Fox to see if I could use her dog trap….my plan was almost ready! On Wednesday I investigated a reported sighting near the river and added a wildlife cam to a fence where David the house owner,  feeds foxes and badgers. I worked late into the night investigating a number of reported sightings in the rain became too heavy too continue. This morning I planned to set up a dog trap in Laura’s garden but a report of a sighting at 8am need closer investigation. It was at the bottom of a garden that backed on to bushes and woodland…so I climbed over, turned left to follow the track throw the undergrowth.  The rain had beaten down the muddy path and I caught my first clue, a very large cat footprint ! I continued to the end where I heard a strange noise which I reported back to owner Laura to be told it was him hissing at me! So I immediately got to work knowing the chicken I had would bring him forward. The cage was set and I ask Laura to sit down with the chicken a call him ….she was already wearing several layers of scented clothes that he would recognise and suddenly we heard a hug pitch meow .. it got louder and louder and I asked Laura to now just speak quietly to herself and not give him full eye contact …as soon as he was close enough Laura grabbed him and we immediately put him into the trap….several cable ties later, hugs of joy the Laura, her husband and two boys helped to prepare his journey home.
With thanks to everyone who helped by postering, sharing, reporting our big cat adventure! Amazing team work 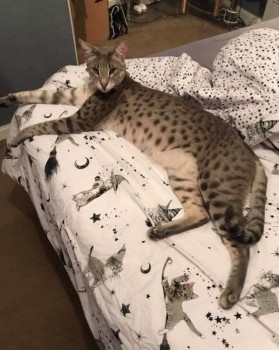