LIONEL MESSI couldn’t resist a kick-about with his beloved dog Hulk during his summer break.

And plenty of fans have been comparing the pooch to Real Madrid ace Sergio Ramos.

After a disappointing run in the World Cup, Messi is enjoying some down time before joining up with Barcelona ahead of the new La Liga season.

But the Barca superstar couldn’t turn down the chance to have a kick-about with his giant Dogue de Bordeaux named Hulk.

In a video posted on Instagram by his wife Antonella Roccuzzo, Messi was seen repeatedly flicking the ball over Hulk in the sun in his garden. 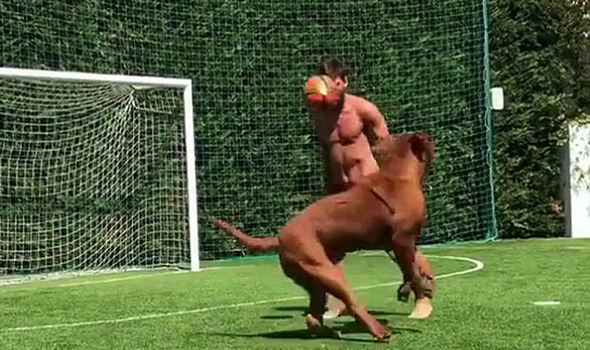 And just like many of Messi’s opponents, Hulk could not keep up with his owner.

And fans were quick to joke the clip was like Messi vying with Real Madrid ace Ramos.

“Messi vs Ramos,” one fan commented.

Another wrote: “That dog [is] Sergio Ramos.”

While one fan said: “What’s Sergio Ramos doing there”