Twelve-year old Sugar piled on the pounds by not getting enough exercise but she has now been selected for the PDSA’s famous Pet Fit Club to help her fight the flab. This year marks the 14th anniversary of the national competition that has helped 137 flabby animals lose the equivalent in weight of 1,190 cans of dog food. Not that it is only man’s best friend who can join the club  – cats, rabbits and rats are allowed to enter the fat-busting competition.

The PDSA today released remarkable photographs of heavily overweight Sugar as she becomes the first entrant into this year’s Pet Fit Club.

Although sweet by nature, Sugar weighs double her ideal size, tipping the scales at 26lb (11.9kg) – the same as a two year old child.

She was rescued eight months ago by Steve Jones, from Caerphilly, South Wales, who explains how she became overweight and has a series of health issues. 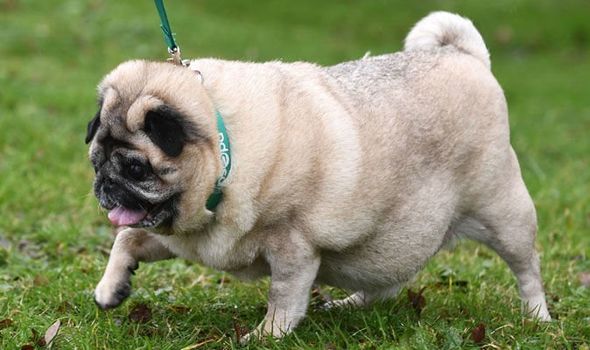 Mr Jones, 62, explained: “Sugar’s owner was partially sighted and her limited vision meant she couldn’t cope with her. She never used to go out for walks at all.

“Sugar has poor vision herself, and is also deaf, which presents quite a few challenges. In the last couple of weeks she’s also had to have all her teeth taken out so she’s not enjoyed the best of health recently.”