A dog was badly injured when it was stabbed in the eye by a burglar.

Family pet Lexi was attacked when three men broke into a house in Rokescroft, Pitsea, Essex, on Wednesday evening.

The men, all carrying knives, threatened the occupants and slashed Lexi’s eye before leaving with bank cards and cash, police said.

Lexi’s owner, who did not wish to be named, said she hoped by sharing pictures of the dog’s injuries, someone may come forward with information.

She said the nine-year-old Staffordshire bull terrier is not expected to lose her eye but has been left traumatised by the attack. 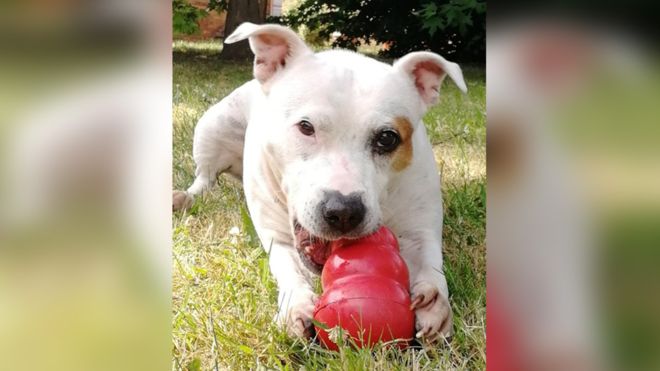 “Lexi is a very submissive dog and loves cuddles,” the woman said.

“She doesn’t like arguing and shouting and was cowering down and trying to get away when this man started slashing at her head.”

Since the break-in, at about 22:35 GMT, Lexi’s owner said she had been “very shaken” and was “trying to hold it together”.

“I hope that if people see what they’ve done to my dog, they might have a bit of humanity in them and help police.

“These men shouldn’t be getting away with it,” she added.

Essex Police said the three men, who made off towards Pitsea Road, were black and in their late 20s or early 30s.