A LARGE panther-like big cat is stalking a small village where several pets have disappeared, police and the RSPCA have confirmed.

Fears were raised for the safety of children and animals after FIVE cats went missing in a week – and a dog attacked by a “panther or puma”. Forensic experts were called to the village near Callington in Cornwall and took a plaster cast of a gigantic paw print. Officials have confirmed the prints – measuring almost five inches – are that of a big cat and police say “something has been here which should not be”.

Police and the RSPCA have confirmed they have attended the scene and one local farmer has also apparently discovered its “den” on his land.

Local James Stephenson raised the alarm after his dog was left bleeding from its injuries and with claw marks on its shoulder.

Mr Stephenson said there had been talk of the beast in his village of Harrowbarrow for a few weeks. 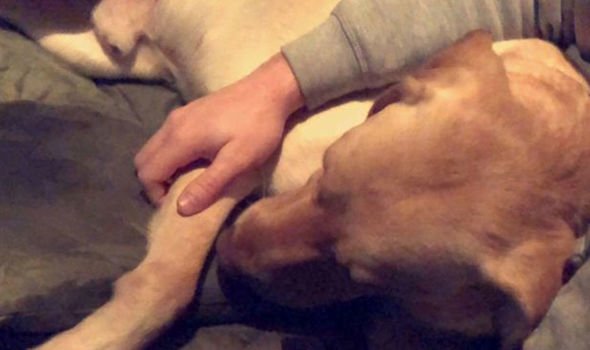 It attacked his Labrador, Marley, two days before the terrifying moment he came face to face with it himself.

The 23-year-old, who lives with his mother Tricia in the village, said he was in his garden with Marley and his collie puppy Maisy when the beast struck on Thursday.

He said: “Over the last couple of weeks we have seen this large black cat walking down the back wall of the field at the back of our garden.

“It’s on a stone wall, often carrying something the size of a lamb. Whatever it’s been carrying is about a foot off the ground so it’s very big.

“We’ve not paid it much attention because they normally shy away from humans.

“We’re not sure whether it’s a puma or a panther but it’s been confirmed that it’s a big cat.

“We’re under the impression that it’s a puma. We went round to warn the neighbours to keep any dogs in and safe. They think it’s a panther.

“They normally only come out at night to not blow their cover but this one is out any time of day because it has adapted to its surroundings.

“It got our attention most when we were out in the garden last Thursday night.

“Marley is a rescue dog so he now has almost an acre of garden when, before, he lived in a confined space. He loves his garden.

“He walks around to make sure it’s safe and secure every night. It’s his routine to make sure him and his family are safe.

“He was walking the far end of the garden and I was about 20 feet from him and he was suddenly taken down to the floor as if his legs had given way from underneath him, like he was pulled down.

“He’s a very agile dog, very careful. I thought he tripped on something and hurt himself. I called him back and he was already beside me with his tail between his legs in fear.

“He was covered in blood. He had a big deep gash on his front left leg and one between his toes.

“On his left shoulder was a big black claw mark, as if a muddy claw had scraped down the side of him.

“He’s still not interested in going out in the garden at night. He loves his garden and now can’t bear it.

“The RSPCA said it had probably already caught something and was eating it in our garden and that’s why it didn’t take Marley, it was just protecting its food when it took him down.”

He said that when his mum first saw it she called the police who advised her to contact the RSPCA as it wasn’t a police matter.

But when the family contacted the RSPCA after Marley was attacked, officers from Devon and Cornwall Police arrived and confirmed “something has been here which should not be”.

Mr Stephenson said they sent scenes of crime officers – “Cornwall’s equivalent of TV’s CSI” – who took plaster casts of paw prints from the garden which were sent to experts for analysis.

They have since confirmed that they were the tracks of a large cat.

Then came a more frightening encounter with the animal in person in his own garden.

He said: “For the past few nights we’ve noticed large footprints down the end of the garden. The animals don’t want to go out.

“On Saturday night I went out to the garden with the dogs. I have a big torch and we have had to resort to putting big floodlights up to scare it off.

“I saw two large green eyes reflecting in the torch light at the bottom of the garden. You’re told to make yourself appear big and aggressive and scare it off.

“I shouted to it and was waving my arms around and it actually started to run towards me. That’s very unusual for a big cat so it’s obviously adapting to its environment.

“I was luckily close enough to the door to get back inside when it was coming at me and then didn’t see it again. The dogs were still being strange.

“It’s not afraid of humans like they normally are. There was a fair distance between is and it should have turned and ran away but it didn’t. It was very scary.

“We have automatic lights on the front of the house and then noticed them go on. The dogs were still unsettled.”

Now he is appealing for locals to keep their pets and children safe and see if they have any CCTV footage of the animal.

He said: “We were told by the police that to take it any further we need to have it on video and a few other reports.

“It’s a danger to children. It will take a dog. So far I’ve heard about four or five cats in Harrowbarrow that have gone in the past week.

“One neighbour said there used to be a large amount of deer in the field and there hasn’t been any for four or five months.

“My mum’s concerned for the dogs’ safety. One of us used to take them out on our own and let them run around. It’s got to the point where we have to take both on leads with at least two people at a time.

“It’s a great concern. None of us are resting properly at night.

“We want to know if anyone has a video camera to catch it on and we want to raise the issue of safety for pets and especially for children. Children are a light snack for something of that size.

“These cats can weigh up to 180 kilos, which is more than my dad, and he’s a big ex rugby player. If one of them finds it can take something down, it will try again.

“It’s not advised to go out looking for it or approach it.

“It’s also a big concern because Cornwall thrives on farming and it could start on cattle or sheep.”