Although Britain sees itself as a nation of animal lovers, up to 85 percent of our huge dog population feel the anxiety of being separated from their human companions. Many dogs are suffering in silence when their owners go out for hours on end oblivious to the misery faced by their pets. Today, the RSPCA is launching its #DogKind campaign to raise awareness of this overlooked but worrying animal welfare issue.

New figures released by the animal welfare charity highlight a worrying disregard for the feelings of intelligent and sensitive pets who can become destructive and fretful when they feel abandoned.

Chewing furniture, scratching doors, howling and messing on carpets are some of the visible displays of angst shown by dogs left on their own

Astonishingly, 22 percent of owners admitted to the RSPCA poll that they leave their dogs for four or more hours a day, with more than a half saying their animals are left shut inside the house when they are out. 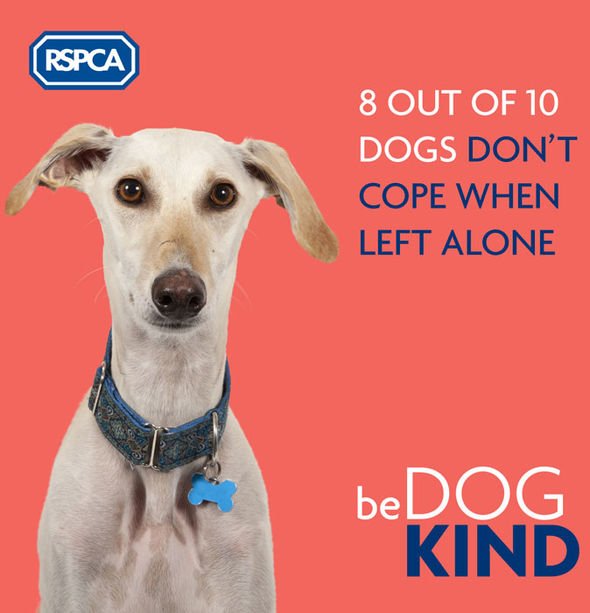 A quarter of owners went on to confess their working hours make it difficult for them to care for their dog as “they would like” while one in five admitted witnessing signs associated with separation related behaviour.

Some even confessed the stress shown by their pets did not really bother them or their families.

Dog Kind campaign manager Daisy Hopson said: “We know that the love between owners and their dogs is unconditional – the centre of each others lives. So, when you leave your dog for any period of time, it can be incredibly difficult for them.

“It’s nothing to do with their age, breed or where they have come from, it’s because many dogs don’t know how to cope when their owner isn’t at home and are unhappy when left alone.

“Pioneering research suggested that 85 percent of dogs may be struggling to cope when left alone and with an estimated nine million dogs in the UK and 26 percent of households with a pet dog, it’s shocking to think that more than seven million of our four-legged friends could be feeling frightened, lonely or sad when home alone.

“More worrying is the fact that many dogs won’t show signs that they are struggling so it’s easy for owners to miss. In fact, many owners may have no idea as 75 percent were unaware that their dogs were finding it hard to cope when on their own.”