Max in the Blackpool gazette

Owner’s search is on to find missing puppy Max after he was taken by a stranger from a Blackpool street.

Mark said: “Max was being walked when another dog spooked him, so he ran off and he ran off down through Gateside Park. “He was seen by lots of people running off with several cars stopping and lots of people getting out of them to help get him. The 33-year-old, who has had Max since he was just 10 weeks old, added: “One man got hold of him and has been seen walking down Mowbray Drive with Max in his arms. “He must have been the passenger of the car because the car he got out of pulled up and he got back in it with Max.

“Mark says that the car in question is a Black Renault. He has also reported Max as stolen to Lancashire Police. 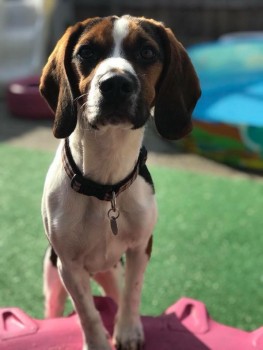 Lancashire Police’s Force Incident Manager (FIM) confirmed that Max had been reported as missing last night before being updated at 11.50am this morning with details surrounding Max being taken into a car before being driven off. The FIM added: “It is chipped so if someone has legitimately found him thinking it’s a stray, it should be able to be traceable at a vets.