A man who slit his dog’s throat with a carving knife during a heated row with his girlfriend has been jailed.

David Owen, 40, held Staffordshire Bull Terrier Lexi’s muzzle as he took the blade to her throat, which left a deep wound that would have been fatal had it been just one millimetre deeper.

The dog was left for four days with the horrific injury on 1 April last year, which had been hastily bandaged up before being reported to the RSPCA on 5 April.

Inspectors took her to the vet to be examined, where it was found that the knife had missed a main artery by one millimetre, where a cut would have certainly led her to bleed to death.

Owen had also sliced at her left ear, leaving the tip hanging off.

Owen, from Netherton in Dudley, West Midlands, was sentenced to five months in prison at Birmingham Magistrates’ Court after being found guilty of causing unnecessary suffering to Lexi in his absence at an earlier hearing.

He was also given a lifetime ban on keeping animals.

Lexi has since made an “excellent recovery” and has been adopted by another family. 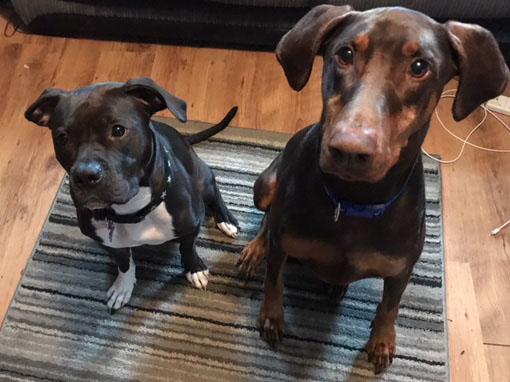 The Worcestershire family that adopted Lexi now have another dog, Monty, who has helped Lexi recover (RSPCA)

RSPCA inspector Steve Morrall said: “It really is amazing that Lexi has made such a fantastic recovery.

“The injury she had was serious but against the odds she pulled through.

“If the knife had gone just a tiny bit deeper I would have turned up at Owen’s house to find a dog who had bled to death.

“Instead, despite being severely injured and in a bad way, we managed to get her veterinary help in the nick of time.

“Thankfully she survived this horrific ordeal and I’m so pleased that she has been adopted into a very loving family who dote on her.

“It is difficult to imagine how terrified she would have been and how much pain and suffering she went through because of this callous act of violence.

“The most important thing now is that she has been given a second chance at life.